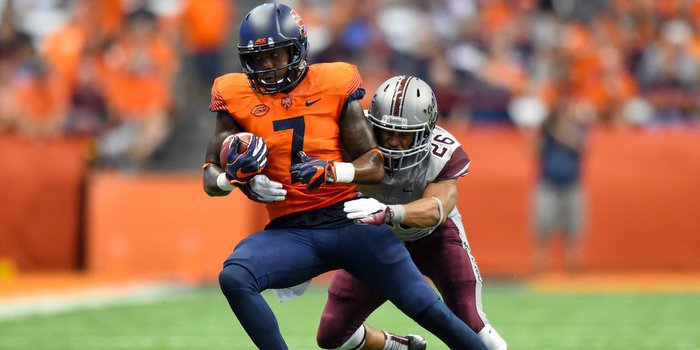 Etta-Tawo is third in the nation in reception yards per game at 134 and sixth in receptions per game. He already has 66 receptions for 1074 yards and seven for touchdowns, and he’ll lead a 4-4 Syracuse team into Death Valley that has hopes for a monumental upset.

His younger brother Amba remembers seeing his brother play in front of the Clemson faithful.

“I remember one that I went to when I was in the seventh grade,” Etta-Tawo told TigerNet earlier this week. “I just remember seeing a packed out house. There was a lot of energy like a regular college football game. It was when I was young, so I hadn't experienced anything like that at the time. It was a different thing for me.

“I remember a lot. I remember all of his roommates and all of his friends. Some of them are in the league right now and I met a lot of them. I got close with many of his friends and I actually went out to California to see one of his old roommates who plays for the San Diego Chargers. That was a big part of his life and he still keeps in touch with a lot of those guys and he's still going down there on the weekends to hang out with friends. It was a big part for him.”

The younger Etta-Tawo grew up in Powder Springs, Ga., where he attended football powerhouse McEachern High School. He had interest in Clemson, but Maryland, Illinois, Purdue, Southern Miss, South Florida and UCF were his only offers and he committed to Maryland in 2011.

After three seasons at Maryland in which he caught just 61 passes for 938 yards and three touchdowns, Amba Etta-Tawo went to Syracuse as a graduate transfer for his final season of collegiate eligibility, and he’s putting up big numbers for the Orange offense.

Why Syracuse? He saw new head coach Dino Babers’ offense when Babers was at Bowling Green and decided he wanted to join Babers in New York.

“When I was at Maryland, we had a chance to play against Bowling Green, so I got a chance to see the offense up front from the opposing sidelines and after I saw that I wanted to be a part of it,” he said. “They create a lot of opportunities downfield and possession routes, so I really enjoy it.”

Etta-Tawo said that while he’s looking forward to being back in Death Valley, he can’t put too much importance on the opponent.

“I try not to look at the stage or the opponent we play; it just goes back to doing what we do best. We have to complete our play calls and our assignments, so that's the only thing I'll be focused on when ball is kicked off,” he said. “It's just another game. We've got to go out there and play as hard as we can and do the things that we need to do to be successful. It's going to be a fun opportunity. These are the kinds of games that everybody wants to play, playing against one of the top teams in the nation. The opportunity will be a lot of fun.”

However, he is looking forward to getting matched up against All-ACC cornerback Cordrea Tankersley.

“That's important. Going against the top guys, is a chance to prove that you belong and that you're supposed to be there,” he said. “It's important to me that we have this type of opponent at this point in the year and I'm going to embrace it as much as I can. It's going to be fun.”

Who does he think his older brother will be rooting for Saturday?

“I have no idea. That's a hard question,” Etta-Tawo said with a laugh. “He loves his team but I think he'll probably go with family on this one.”