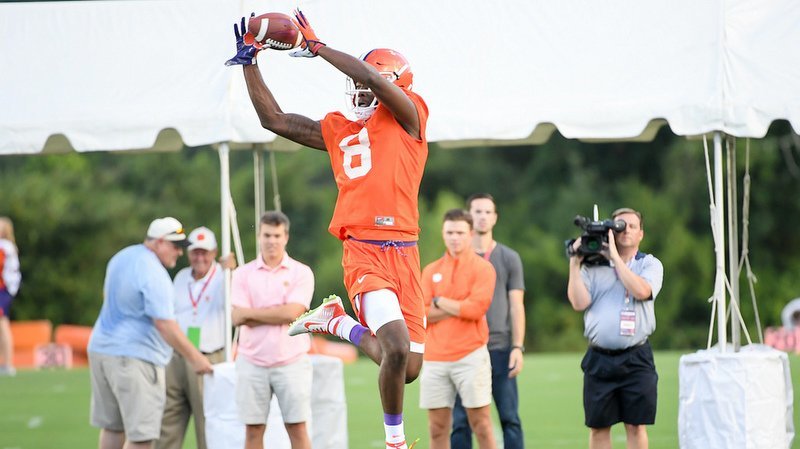 CLEMSON – One advantage of being the head coach and CEO of a college football program is you get to take a look at each position group, and Clemson head coach Dabo Swinney is making sure he looks at each of the true freshmen.

The Tigers held their third practice of fall camp Monday on the practice fields Allen N. Reeves Football Complex, and Swinney said he has been impressed with freshman receivers Justyn Ross and Derion Kendrick.

“DK had the spring and he’s made improvements. Justyn is really natural. I love his coachability,” Swinney said. “You never know until you start coaching a guy where he’s going to be. I’ve had some guys who are really talented and you go, ‘Oh boy, this is going to take a little while to get them to where they need to be.’ He’s one of those guys who is very natural at a lot of things and the things we need to correct and clean up, he’s hungry for that coaching and really applies.”

Swinney said he was impressed with what he’s seen out of Kyler McMichael, Justin Mascoll, and Mario Goodrich.

“That whole group (the newcomers) is what I hoped they would be. Some of them I’m just seeing for the first time like Justin Mascoll,” Swinney said. “He’s kind of a granddaddy long leg running around out there. He’s long and athletic. I’ve been pleased looking at him. Mario Goodrich and Kyler McMichael are just what I hoped they would be. Mario made a one-handed interception today that was awesome. He’s got great ball skills. He, technically, has a little more to improve on but I love his coachability. He’s tough, he’s got great ball skills, he can run. Kyler is one of the fastest kids we’ve had come in here. He’s explosive and physically in such a good spot. Very encouraged by those couple of young guys.”

Others that have impressed are running back Lyn-J Dixon and kicker B.T. Potter.

“Lyn-J Dixon, I was holding judgment on him. I was very pleased with him the first two days. Just his quickness, he’s got natural vision,” Swinney said. “That little sucker can scoot. He’s picking things up. I wanted to hold judgment until I see him in pads and see how he’s going to respond inside with Dexter (Lawrence) and Christian (Wilkins) and those cats. He didn’t back down. He’s got some bite to him. I’m really encouraged with him.

“B.T. Potter has a huge leg. Likes to compete. He’s not afraid. He’s got a little swag to him. The guys like him. A lot of practices we’ve been ending with competition there - kicking and punter in front of the whole team creating some who can step up and compete right there. He’s been punting too. He’s exactly what we thought he would be. He’s going to be very talented. It will be fun to watch.”

The early enrollees have also shown up on Swinney’s coaching radar.

“The mid-years are all better. They look like red-shirt freshmen. Some of them still have a ways to go and haven’t gotten quite as many reps as some of the others but they’re all better,” Swinney said.