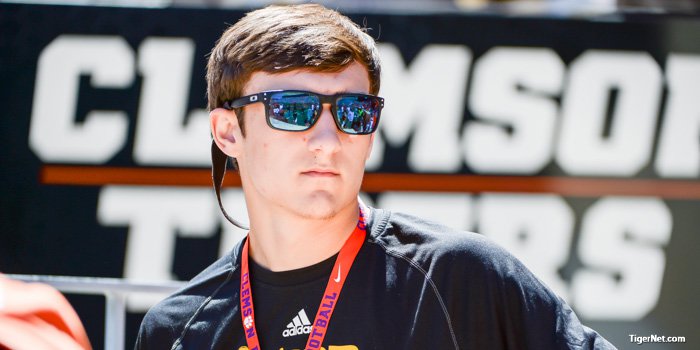 CLEMSON – You had me at hello.

With apologies to the writers of Jerry Maguire, that was the one statement that grabbed my attention at Clemson head coach Dabo Swinney’s high school camp Wednesday afternoon.

But more on that later, because we have a lot of reports to pass along.

*We’ll start with in-state kicker B.T. Potter, who received a Clemson offer Wednesday morning. He is on campus and kicked in Death Valley Wednesday morning, and the coaches saw enough to extend the offer.

I spoke to a few people who were present during that session, and I heard he was hitting 50-yard field goals with ease and has great accuracy, even off the ground. He can also punt, but another value Potter brings is that he could be a guy who hits 50 to 60 percent of his kickoffs for touchbacks.

One person who saw Potter kick this morning said he was putting kicks eight and nine yards deep in the end zone on a regular basis. I know Clemson is his dream offer, and wouldn’t be surprised if he commits sooner rather than later.

Clemson has been missing that kickoff specialist since Bradley Pinion departed for the NFL. 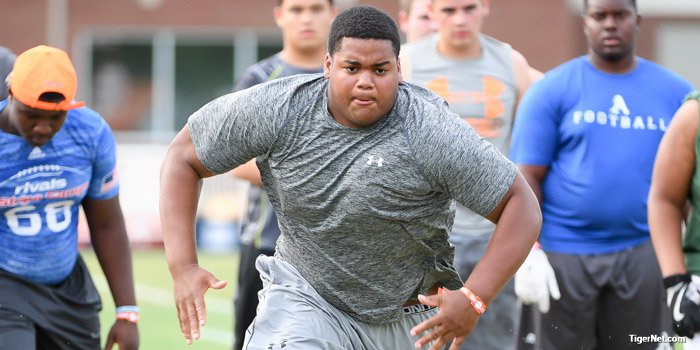 *I also have some additional intel to report on Bowling Green (KY) South Warren 2019 four-star defensive tackle Jacob Lacey, who is on campus for all three days of camp. Lacey has offers from most of the big names in this part of the country, including Florida St., Ohio St., Notre Dame, Tennessee, Penn St. and Michigan.

I was walking across the practice field Wednesday afternoon and ran into Lacey’s father, David Lacey, who is one of nicest guys you’d ever want to meet. He told me that he met Swinney Tuesday evening around 8:45, and his comment about Clemson’s head coach shows why the Tigers recruit so well.

“He (Swinney) pointed at me, and said, ‘Who are you?’ I told him I was David Lacey, and he told me he had been looking for me,” Lacey said. “He told me to get in his truck, and we rode around for 40 or so minutes just talking. He was telling me about Clemson and what it’s like here. He was just a regular guy, and he talked to me like I am talking to you.”

I commented back that Dabo can be a force of personality, and Lacey smiled and said, “He had me at hello.”

*Clemson quarterback commit Chase Brice has been on hand today to watch the proceedings. He’s bigger (in a good way) than the last time I saw him, and he said he’s ready to get to campus and start work. He will move in June 25th.

*We told you yesterday that Florida commit and 2019 cornerback Jaleel McRae out of New Smyrna Beach (FL) was on hand but didn’t work out because he’s recovering from a torn ACL. McRae was back today, and he spent time talking to more than one coach. The fact that he’s still on campus is a good thing.

He spent time talking with Swinney yesterday and toured the facilities with coordinator of recruiting operations Tyler Clements. He has offers from Florida, Georgia, and N.C. State. He's committed to Florida.

*I have some additional news to pass along on new defensive line coach Todd Bates. I said yesterday that I like the way he coaches, and one coach that has been helping with the defensive linemen told me that Bates is “extremely organized” and walks around with a stopwatch around his neck, timing each drill down to the last second.

I saw him working with another one of Clemson’s staffers today – Lemanski Hall. Hall is a former teammate of Swinney’s at Alabama, and the thought process is that when the NCAA allows a 10th full-time coach Hall will join Bates as a defensive line coach. I can see that – the two work well together.

*I spoke with one high school coach who told me that Clemson was a “destination camp” for his school (which is a story idea), and he said that Clemson is now held in the same esteem across the region as Alabama and Ohio St. With the cost of camps these days – and many schools having to raise money for gas and food – it’s good to be one of the few schools that high school coaches feel like they have to get to.

*In the morning recap, I told you about 2019 running back Kendrell Flowers. The more I watched him Wednesday afternoon, the more I liked him. However, another running back I saw this afternoon that I liked was Charleston (SC) First Baptist 2019 Mikey Dukes.

* Another kicking note - I was told to watch out for 2019 Tampa (FL) Jesuit kicker/punter Aidan Swanson. He's on the radar of a lot of school as a punter, and on Wednesday he received a preferred walk-on offer from the Tigers.

Blessed to receive my 1st offer as a PW from Clemson university, my dream school! #GoTigers #ALLIN pic.twitter.com/oTXBr2SYjw