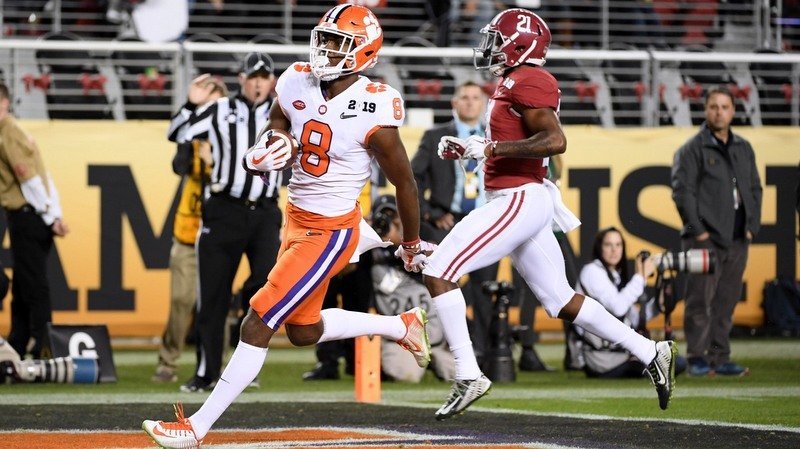 Domination was the theme much of the season for Clemson football.

The Tigers turned it up a notch in the College Football Playoff, however, easing to the finish line of a historic season with two wins by four touchdowns each over the two other highest-ranked teams nationally.

Given the stage and opponent, this performance was more than an exclamation mark on the first perfect campaign in the modern era of college football.

This season the ‘Second Look’ features the TigerNet staff grades for Clemson averaged as a group and offers some different perspectives on the action each week. Here’s our look at the National Championship win:

The prevailing feel from coaches - and even a number of national analysts - was that the true freshman Trevor Lawrence was ready for this moment. Once he settled down from the big-game adrenaline early, Lawrence teamed up with a corps of elite receivers to dice up a talented Alabama secondary and prove those pregame feelings right.

The hype out of the effort for Lawrence is more than deserved - even if this game may not have been his best performance of the season throw-by-throw. What Lawrence did continue to do was make sure only a Tiger would be on the other end of his attempts and not put the ball in danger in a game where turnovers on the other side certainly helped tip the balance of the contest.

Words fail to accurately describe the touch on these throws and the incredible skill shown by Justyn Ross and Tee Higgins:

The ability to make those throws was due to quick-decision making and a standout effort from Clemson’s pass-protection, which didn’t give up a sack. It was the first time since the 2014 SEC title game that Alabama didn’t register a sack versus a Power 5 opponent (min. 30 pass attempts).

While solid on third down offense coming in (25th nationally), the Tigers were on another level against a stout Alabama defense - converting 10-of-15 tries with seven coming on pass attempts and eight in third-and-5+ situations.

Travis Etienne maintained his nation-leading scoring run with two rushing touchdowns and another on a shovel pass. He had three runs of 10-plus yards to move up to sixth in the nation in the category and his 38-yard run was his 12th of 30-plus yards (2nd nationally to Memphis’ Darrell Henderson, who had 16).

And big plays marked the season from start to finish - no matter the opponent - with four of 30 yards or more coming versus Alabama to move into a tie with Oklahoma for the most this season (59).

This group hit another notch when Lawrence was given the keys to the offense this season and the Playoff dominance showed just how elite it was. -- Brandon Rink

The Lawrence to Ross connection was working just fine in the National Championship. pic.twitter.com/ftgYAnz0aS

During the first quarter of the win, Clemson’s defense bent to the tune of 25 plays and 224 yards against a determined Alabama offense, giving up an astounding nine yards per play. That was the high-water mark for Alabama.

The defense allowed an early second quarter field goal but held the Crimson Tide off the board the rest of the way, giving up just 42 yards in the second quarter and only 14 in the fourth quarter. Alabama was 3-of-6 on 4th down and 4-of-13 on third down.

Alabama was just 2-of-4 inside the red zone, with only one of those scores coming via touchdown.

Brent Venables’ unit gave up 443 total yards and four yards per rush, but stiffened when it counted, turning in one of the best defensive performances of the year against an offense that had scored at will all season. The game was a fitting tribute to a group of seniors – especially those on the defensive line – who gave it their all one last time on the field. -- David Hood

Tua is PICKED OFF FOR THE SECOND TIME TONIGHT#ALLIN #RollTide #NationalChampionship pic.twitter.com/m1KggPV1ee

Clemson special teams get an A this week, if for no other reason than they stopped a fake field goal by Alabama in the third quarter that effectively sealed Alabama’s fate.

It's a fake! And Clemson is ALL over it. pic.twitter.com/uSndTijvUu

The Crimson Tide trailed 31-16 to open the second half and together a drive that lasted over five minutes. Facing a 4th-and-long inside the Clemson 30, Alabama elected to run a fake field goal even though Clemson was in a field goal safe package. Defensive tackle Nyles Pinckney shrugged off a blocker and made the tackle for a 2-yard loss and the Crimson Tide never recovered.