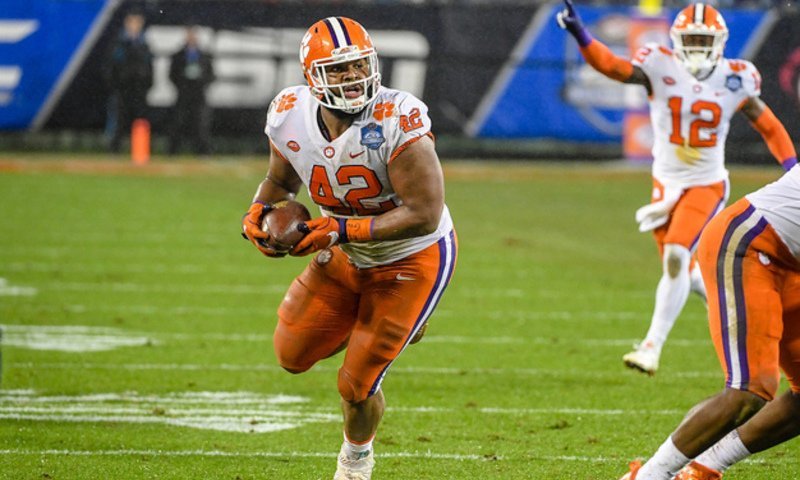 Clemson picked up three turnovers and scored touchdowns after all three to keep a comfortable margin most of the night.

No. 2 Clemson cruised into a fourth-straight College Football Playoff appearance with a 42-10 win over Pittsburgh over the weekend.

Brent Venables’ defense rebounded by holding the Panthers to single-digits in passing yards and Clemson rolled to over 300 yards of rushing to put the game away.

This season the ‘Second Look’ features the TigerNet staff grades for Clemson averaged as a group and offers some different perspectives on the action each week. Here’s our look at the ACC Championship:

A fast start and a strong finish were more than enough to get the job done versus the overmatched Panthers.

The Tigers ground game struck a chord from the opening play - a season-long 75-yard touchdown rush from Travis Etienne - to help propel Clemson to a fifth game of over 300 yards rushing (301). To put that rushing success in perspective, they topped 300 rushing yards five times total from 2015-17 (and not once in 2016).

Clemson freshman QB Trevor Lawrence hit some key connections passing, finding Tee Higgins twice in the end zone - and one a nice toe-tap on the sidelines. Overall, however, Lawrence hit a season-low in completion percentage (50) and tied another in yards per pass attempt (4.9). In addition to some tough weather conditions, Pitt played its role in those figures as they played a physical brand of football that challenged Clemson’s receivers and had them in place for four pass breakups from the cornerbacks.

Lawrence continued to show his overall development with his running game, displaying some moves in the open field to move the chains.

Following up a 744-yard effort last week, the overall effort didn’t look quite as sharp in comparison, but with a game never in doubt, Clemson executed as much it needed to - plus a little more - to keep its momentum going into bowl practice. -- Brandon Rink

Pitt had two scoring drives early in the ACC Championship that covered a total of 15 plays and 101 yards, leading to 10 points. Take those two drives away and the Panthers ran 49 plays for 99 yards the rest of the game. That includes eight passing yards – you read that right – eight passing yards.

Pitt quarterback Kenny Pickett was a woeful 4-of-16 for those eight yards. The Panthers ran the ball 49 times for 192 yards, an average of four yards per carry. However, Pitt averaged just 3.1 yards per play, suffered three turnovers that led to 21 Clemson points, and the Tigers racked up two sacks and 9.5 tackles for loss.

A week after giving up way too many yards to an average South Carolina offense, Brent Venables’ defense responded in a big way against the one-dimensional Panthers. -- David Hood

Will Spiers connected on his longest punt of the season with a 63-yarder Saturday evening. However, take away those 63 yards and Spiers had 188 yards on six punts for an average of 31.3 yards per punt. Included in that number was a 15-yard punt in the first quarter.

Clemson had five punt returns for zero yards (every punter the Tigers face has an All-American night), didn’t have any kickoff returns, but covered both punts and kickoffs well.

The Tigers didn’t attempt a field goal but hit all six extra point attempts, all by Greg Huegel. -- Nikki Hood