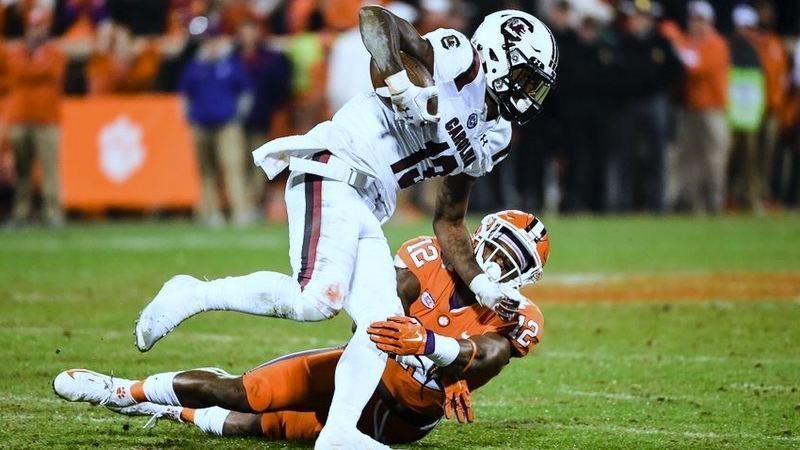 A tale of two sides of the football added a 12th win in as many games but plenty of questions as the No. 2 Tigers advance on in their College Football Playoff hopes.

All totaled, instate rivals Clemson and South Carolina combined for 1,344 yards and 91 points in win No. 5 in a row for Dabo Swinney's group.

This season the ‘Second Look’ features the TigerNet staff grading Clemson as a group and offering some different perspectives on the action each week. Here’s our look at game twelve as Clemson heads into the ACC Championship Game versus Pittsburgh (8 p.m./ABC).

If it weren’t for a second-quarter fumble by freshman running back Lyn-J Dixon and a punt toward the end of the first half, it would be a perfect day.

Add in the fact that running back Travis Etienne rushed a career-high 28 times for 150 yards with two rushing touchdowns. He also pushed his season total in rushing yards to 1,307, which now sits fourth on the school's leaderboard for rushing yards in a single season. During the contest, Etienne reached 2,000 rushing yards for his career, and he scored his 18th rushing touchdown of the season, a school record.

The game was Etienne’s sixth 100-yard rushing performance of the season and the seventh of his career. Clemson now holds a 38-2 record when producing a 100-yard rusher since 2011.

Quarterback Trevor Lawrence wasn’t a slouch – he was named the national quarterback of the week by Pro Football Focus.

Lawrence posted the highest grade of any college player this week with a 94.2, connecting on 27-of-36 passes for 393 yards with a touchdown. -- David Hood

For almost every bit as good the offense performed Saturday, the defense struggled mightily in a game that Tigers defensive coordinator Brent Venables said he was “embarrassed” to have his name attached to - shouldering the blame first and foremost.

Since the week two struggles at Texas A&M, Clemson had largely sewn up pass coverage woes - giving up only seven passes of 30 or more yards in its previous nine games. The Tigers surrendered four of 30-yard completions or more and six of 25-plus versus the Gamecocks.

With only big games ahead, two key questions emerge: What happened? And can Venables and company fix it? Venables’ track record and the consistently-impressive grades throughout the season suggest an easy answer to the latter query: yes.

The Gamecocks threw the kitchen sink at Clemson in terms of variety in personnel from the opening drive on. Swinney blamed alignment issues but also credited South Carolina’s execution. Tempo seemed to be a factor as well at points.

South Carolina just came to play with Jake Bentley facing eight QB pressures and still picking apart the Clemson back-levels for 510 yards and five touchdowns. He had previously had his two worst-career graded games versus the Tigers and picked Saturday to have a career-best effort. The Gamecocks were a step ahead over most of the field - up to the red zone, where Clemson continued its strong efforts this season by allowing just two scores in four trips (5th-best among Power 5 in red zone TD percentage allowed now - 44.5).

South Carolina did a fantastic job of getting mismatches for its top playmaker in Deebo Samuel. The alignment of three receivers and a lineman to the right pitted Samuel on safety K’Von Wallace - with Bentley moving around in the pocket and Samuel doing the rest for a 75-yard score:

After one half Saturday, Clemson had given up more yards (314) than it had in 15 of its previous 16 entire games, but there was some improvement in the second session. After back-to-back first downs to start out, the Tigers’ pass rush did push South Carolina back to the 50 and then forced a punt. On their next possession, 15 plays and 73 yards rendered no points as Clemson teamed up with its offensive side to go from a one-TD game at the half to a three-score lead for much of the fourth quarter.

Unfortunately for Swinney’s Tigers in some ways, I’m not sure we’ll know if the problems shown Saturday are “fixed” until postseason action. Pittsburgh can certainly try to expose the Tigers’ secondary but they rank 120th in passing offense coming in. If anything, the effort is a wakeup call if any in the group lacked focus going into the final stretch.

Clemson has had standout performances versus efficient passing attacks this season (Most notably NC State - 9th in passing offense currently and only had 193 yards with two INTs and no passing scores in October versus the Tigers). Saturday’s defensive effort is not going to bring home hardware come late December and early January, and Venables coaches a group that knows just that. -- Brandon Rink

The Tigers punted just twice and averaged a pedestrian 37 yards per punt, but kept it away from dangerous return man Bryan Edwards.

Clemson kicker Greg Huegel missed a field at the end of the first half that would have given the Tigers a double-digit lead heading into the locker room, and it was from just 39 yards. Huegel hasn’t had many chances this season – he is 9-of-13 – but had made four in a row prior to the miss.

Derion Kendrick was decent in the kickoff return game, and the Tigers didn’t register a punt return. -- Nikki Hood