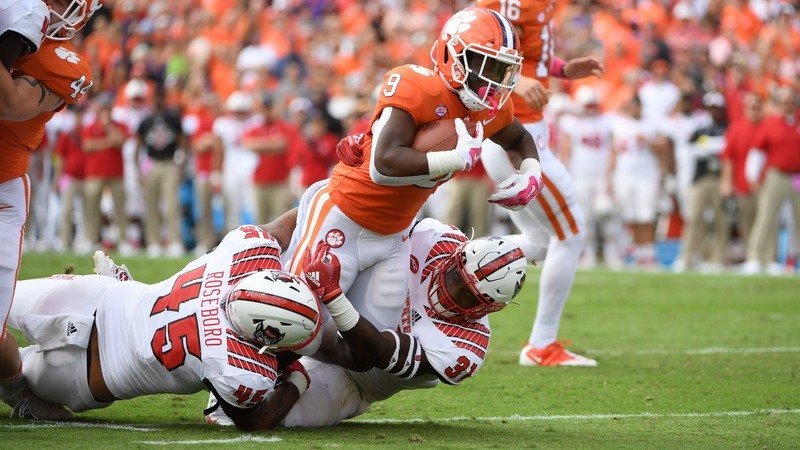 Clemson and NC State square off at 7:30 pm Saturday in Carter-Finley Stadium in a series that has seen Clemson win seven straight and 14 out of the last 15. Last year’s contest was lopsided (a 41-7 Clemson victory), but the Tigers won by just a touchdown in Raleigh two years ago (38-31) and survived an overtime scare against the Pack in Clemson in 2016. Clemson won a 56-41 shootout in Raleigh four years ago.

NC State is 4-4 overall but has just one ACC win – over hapless Syracuse – as they prepare to take on the Tigers. The Pack run a 3-3-5 defense that is ranked 48th nationally.

“We have a lot of respect for NC State. We've had some really good battles with them over the last few years. it's a really good atmosphere up there in Raleigh,” Scott said Monday. “I think in looking at their defense this year, their scheme sets them up to do really well against the run. I think outside of one game against Boston College - who just lined up with a bunch of tight ends - they've done a really good job of stopping the run. They are a 3-3-5 lineup on defense, which is a little different than a lot of the other odd fronts we've seen. That changes a lot of our rules, so that is something we have to spend a lot of time on his week.”

“When you turn on the video of NC State's defense, those guys make plays,” he said. “These guys, they have some talented players and they've done a good job of getting pressure on the quarterback. I think this scheme is very unique and will have our guys' attention and we will have to go play well.”

He then went on to say that the NC State defense is one of the most physical the Tigers see each season.

“What stands out is they are a tough out. They play us very physical,” Scott said. “Their defense has been very physical each time that we've played them. A few years ago here, Wayne Gallman got knocked out of the game on the first drive and we had a bunch of turnovers that their defense caused. I would say the Clemson-NC State battle over the last four or five years has been one of our toughest games and most competitive games. I think it's just the respect we have for that group. We have a lot of respect for them and their program and we have no doubt that they will be ready to play and we will have to play well.”

Clemson’s offense is on a roll, however, and looks to be unstoppable heading into the final quarter of the regular season.

“To have a special season, your best players have to play well,” Scott said. “I think these last four weeks, I really like where we are mentally and really preparing each week with a one-game mindset. For us, it's about continuing that process and working to get better each week. If we do that we will continue to have success.”