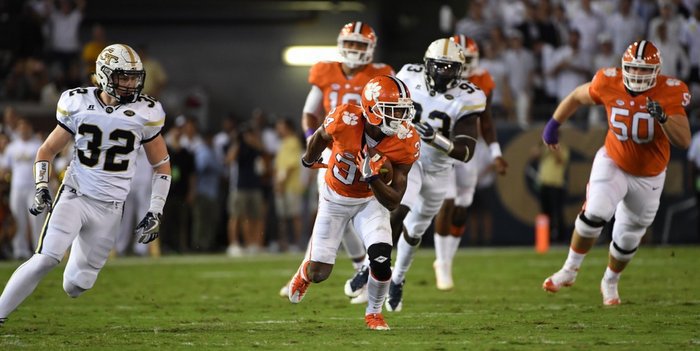 CLEMSON – When Ray-Ray McCloud stepped on campus a little over a year ago, the fans expected him to be an instant superstar. However, the former 5-star prospect had some growing up he needed to do.

At Sickles High School in Tampa (FL), McCloud was simply one of the best athletes on the field regardless of the opponent, but that all changed when he stepped on Clemson’s football field.

Clemson head coach Dabo Swinney has had several 5-stars at Clemson, and McCloud said Swinney’s message to him when he arrived at Clemson was simple.

“I didn't feel any pressure, but Coach Swinney assumed that I felt that way. Playing from a work ethic standpoint, I had to learn that it was just football and that I needed to play like I did in high school,” McCloud told Tigernet earlier this week. “It was different and I had to work harder on the field, in the classroom and in the weight room. Coach Swinney always says that every day you come to work, you can get cut like in the NFL. I had to learn to work like that.”

For McCloud he had to learn that he would have to work for every snap, ever catch and every punt return. Nothing would be given to him.

“The speed of the game wasn't a big deal. It was more of working and working hard; that's what it was for me,” McCloud said. “I had to not be entitled. Knowing what I can do and working hard every day. I'm making the plays in practice before I make them in the game. That's been the difference for me. I'm staying prayed up.”

Luckily for the sophomore receiver, he had one of Clemson’s hardest workers in his corner.

“Tay (Artavis Scott) really took me under his wing. Me and Tay grew up together, so I was tight with him before I ever got here,” McCloud said.

McCloud wasn’t the only one putting in extra work, as strength and conditioning coach Joey Batson put the entire team through a gauntlet as they remembered the team’s only failure of the 2015 season.

“First, I want to put it in God's hands and give him all of the glory for what I've accomplished so far,” he said. “It was hard work in the summer. Coach (Joey) Batson was on us really hard this past summer. As a team, we kept that Alabama game in our head to grind all summer. That's what it has been.”

The 2016 season began with a bang for McCloud – but maybe not the one the Florida native was expecting after he became famous for dropping a punt return just before the goal line. However, he said the ability to quickly forget the last play has helped him move on and become a better player.

Through four games, McCloud has 21 catches for 255 yards and two touchdowns and he said he’s been fortunate to have the opportunity to start the last two games after Hunter Renfrow went down with a hand injury.

McCloud continued his good work with the first 100-yard receiving game of his career Thursday night at Georgia Tech. McCloud tied a career-high with eight grabs for 101 yards.

“It gives me the opportunity to start, but anybody could've started for us - Trevion Thompson, Deon Cain because Tre was behind Renfrow and Deon can also play the five,” he said. “Our receiver room is that good that we have six starters that can play. We just tell Renfrow that we've got him just like we had Mike (Williams) last season. Renfrow gets to come back when Mike had to sit out the whole season. In the game Renfrow did play, I had seven catches, so that doesn't have anything to do with it. In our offense, even if we don't start, the next series or that series we'll be in.”