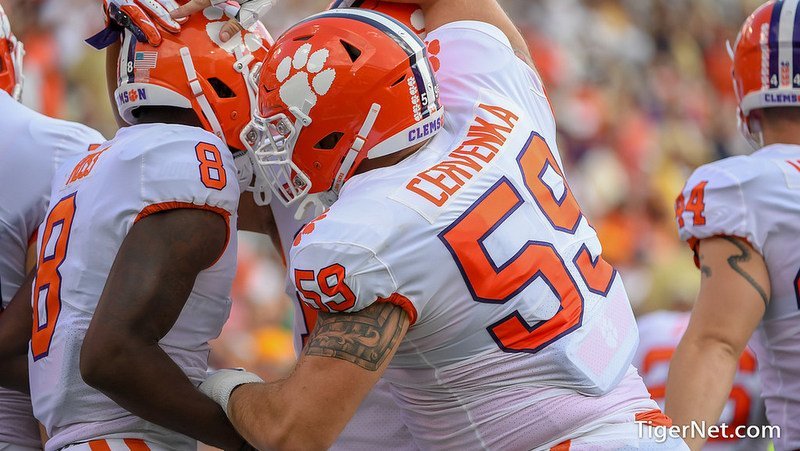 Cervenka says Saturday was perfect from start to finish

CLEMSON – From getting his first start to the Tigers scoring 59 points – the number he wears – Saturday was perfect from start to finish for Gage Cervenka.

The junior offensive lineman earned his first start in Clemson’s 59-10 win over Florida State last weekend and for Cervenka, it was a dream come true.

“It was amazing. It was everything I dreamed of and more,” Cervenka said Monday afternoon. “We scored 59 points and that’s my number, so it was kind of nice to do that. It was awesome. I hate that Justin got hurt and I’m glad he is back and healthy again. I really can't describe that feeling to be able to go out there and perform for my team and everything.”

Cervenka came to Clemson as a defensive tackle but decided to make the switch to the offensive line in 2016 and he said the experience he’s gotten over the last two seasons paid off in a big way Saturday afternoon.

“It helped a lot. Having the experience of the Syracuse game, I was in on the last drive to win the game,” Cervenka said. “It really helped me out a lot and it calmed my nerves going into the game knowing that, 'Hey, I can go out and compete with these guys.' I go against the best defensive line in the country every day, so it helps out a lot knowing that I've been in this situation before so I can do this.”

Co-offensive coordinator Tony Elliott echoed those thoughts and said that Clemson’s philosophy of playing a lot of players on game day, prepared Cervenka for his moment.

“Shout out to Gage, he did an unbelievable job, and it's a testimony to our philosophy of playing all those different guys every week,” Elliott said. “People worry about us rotating different guys on the offensive line, but we get those guys the experience at every position. I told him, you're driving a Maserati now this ain't a big Chevy, it's fragile, so make sure you know what you're doing. I think the guys really rallied around him and we're all proud of the way he played.”

Because of the preparation day in and day out, Cervenka said Saturday was no different than his many high school wrestling matches where he was 199-1 and a four-time state champion.

“I was a little nervous, but that's going to happen with any competition. Ya'lI know I wrestled in high school and before every match, I would still get nervous,” he said. “It's just how competition is. I just look back and either way - if I wasn't starting, I would prepare the same way. I just looked back on my preparation and knew that I was ready for this, so it wasn't too bad.”

While Cervenka and the entire Clemson offense are pleased with their play over the last three games, he said they know the best is still yet to come.

“We are just trying to be our best, we are a top caliber offense so we are trying to play like it,” he said. “We want to get better. We've played well for a couple of weeks now, but we know we can play better. We strive to be perfect. We're not satisfied with how we've played yet, and that is what just keeps driving us.”