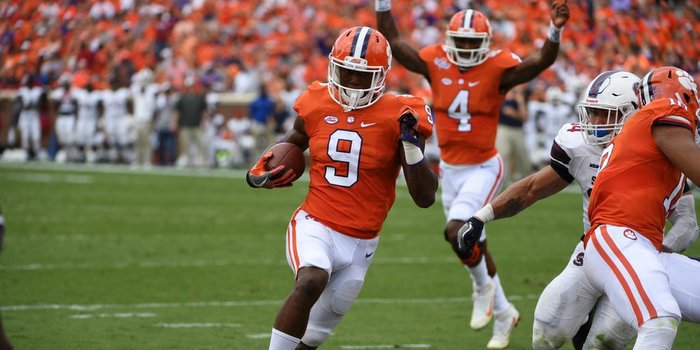 The Tigers put up 555 total yards of offense (227 yards on the ground and 328 through the air) in rolling over South Carolina St. 59-0 on a hot and muggy afternoon in Death Valley, staying true to quarterback Deshaun Watson’s promise to get back to having fun.

“It really started Monday when the guys got back. Everybody had to look at themselves and get focused. Really, it just comes down to having fun,” Scott said after the game “That's the biggest deal - last week guys had distractions and they weren't having fun. This week we told them to put all of that stuff away and just go out and have fun because when we're having fun we are playing our best and executing and that's exactly what happened. We got off to a fast start and found our groove. I am really proud of the way the guys responded.”

Co-offensive coordinator Tony Elliott agreed with Scott’s assessment, and said he was just happy to see the Clemson offense he saw at the end of last season.

“Just really happy for those guys to get back to being who we are,” Elliott said. “I saw a team that was having fun and an offense that was in rhythm coming out of the gate. I saw a lot of guys that were happy for other people's success. That was one of the trademarks of the offense last year. It was that unselfishness and excitement for everybody involved. It was a good win and a step in the direction but we still aren't where we want to be.”

The offense entered the 2016 season with high expectations but scored just 19 in the season-opening win at Auburn, and the receivers dropped eight passes in last week’s 30-24 win over Troy.

That led to more questions than answers as the coaches and fans alike searched for something that would get the Tigers rolling again.

“When you have adversity, it's going to tell you a lot about your team,” Scott said. “It's going to tell you about that group of individuals, and I am not surprised at all. That's why, even though there was a lot of focus and intensity in practice this week, I don't think deep down any of our coaches were ready to panic because we have great young men in that locker room that are great players. Really it was just about focus and getting locked in and going out there and executing and doing what we do. That is what we did today.”

Watson met with the media Monday and apologized for his early-season work, and made a promise that he was going to get back to having fun.

“There was a little added focus and intensity this week. You saw at the beginning of the week - he was relaxing and just wanting to go out and have fun,” Scott said. “Today, he was a little more vocal. I thought he played really well when he was in there and then it came to a point where we needed to get him out I think there will be a lot of confidence in that group when we take the field in Atlanta in a few days.”