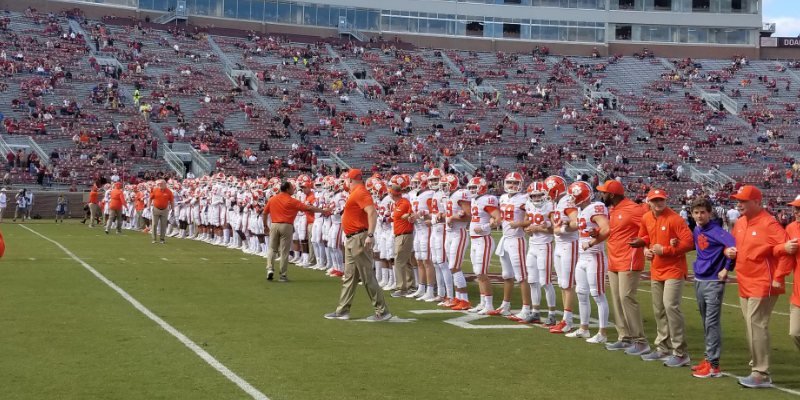 BrandonRink®
3:53 PM
Final: No. 2 Clemson 59, Florida State 10. Trevor Lawrence throws for 314 yards and 4 TDs. FSU is held to minus-21 rushing yards after a season-high 14 TFL for Clemson. Up next is Louisville next Saturday at noon.

Ben Batson under center for the ?? and now all 72 players that traveled to Tallahassee have played in today’s game #ALLIN pic.twitter.com/1YaDJu3O10

BrandonRink®
3:46 PM
Ben Batson in at QB for Clemson with under 5 to go.

deelittlebear
3:43 PM
What channel is ESPN News on???
I don't like that they changed the channel to air the game at the very end ??

BrandonRink®
3:38 PM
Brice's target to Will Swinney in the end zone ends up as a FSU interception after he and Swinney fought for the ball. FSU takes over at the 20 with 6:51 to go, 59-3 Clemson.

XERXES_II
3:29 PM
FSU fans decide to check out and find something else to do with their time.

BrandonRink®
3:23 PM
Xavier Thomas gets the sack and Deondre Francois leaves the game with some help after being down for awhile. James Blackman in for FSU.

Clemson gettin after it today at Tally. Still in 3rd up 45-0. Defense has been DOMINANT!! Trevor Lawrence calming thrown for over 300 yards. This is a mismatch at the LOS! Wow!! Back to back weeks now Tigers gettin things goin!!
In other news. Noles look awful!

BrandonRink®
3:00 PM
Brice connects with Diondre Overton over the middle and he takes it 61 yards to the FSU 11.

BrandonRink®
2:58 PM
FSU's Nyqwan Murray threw a punch after the last offensive play and has been ejected. The Seminoles hit a short field goal to break up the shutout. 45-3 Clemson, 4:35 3rd.

Rodgers joins Artavis Scott (2014 vs. South Carolina), Germone Hopper (2014 vs. North Carolina) and Craig Brantley (1974 vs. Virginia) as the only Clemson players to catch two touchdowns of 50 or more yards in a single game since 1950. He's the first to do so on the road.

BrandonRink®
2:45 PM
FSU has minus-8 rushing yards at the 7:59 mark of the third quarter. Clemson has six tackles for loss for 21 yards lost for the Seminoles.

BrandonRink®
2:31 PM
FSU forces Clemson's second 3-and-out of the day but the punt is fumbled and TJ Chase recovers at the FSU 10.

BrandonRink®
2:19 PM
Amari Rodgers breaks an attempted tackle and goes 58 yards to the house to put Clemson up five scores in Tallahassee.

BrandonRink®
2:18 PM
Derion Kendrick runs side to side and eventually 28 yards upfield for Clemson to start at its 39.

Really no update on Travis Etienne - might have more to do with pass pro than injury. Clemson spokesman says he hasn't heard anything

BrandonRink®
1:55 PM
Galloway drops Lawrence's fourth down target and FSU takes over on downs at their 35 with eight seconds left.

BrandonRink®
1:49 PM
Amari Rodgers with another big punt return (34 yards) to the FSU 34. 34 seconds left in the first half.

BrandonRink®
1:43 PM
Garrett Williams gets the handoff this time for a 2-yard TD rush.

Wilkins as the running back behind Lawrence as the lead blocker???? That just ain't fair

BrandonRink®
1:30 PM
Clemson brings in the jumbo package in and Christian Wilkins punches in the TD.

BrandonRink®
1:29 PM
Lawrence attacks the end zone on the next play and FSU draws a pass interference call to give Clemson 1st and goal at the 2.

BrandonRink®
1:28 PM
Targeting is call on the hit and FSU DB Hamsah Nasirildeen is ejected.

BrandonRink®
1:27 PM
Trevor Lawrence takes a hard hit on the keeper and there's a scuffle. Swinney not pleased and still giving the refs a piece of his mind.

BrandonRink®
1:25 PM
Francois' pass is tipped by Dexter Lawrence into Tre Lamar's arms and he returns to the FSU 30.

BrandonRink®
1:22 PM
Personal foul called on K'Von Wallace after his hit on the FSU QB Francois. FSU at the Clemson 30 with a new set of downs.

BrandonRink®
1:17 PM
FSU moves the ball into Clemson territory in four plays to the 47 and Clemson calls a timeout with 6:41 left in the first half. Tigers lead 14-0.

BrandonRink®
1:12 PM
Travis Etienne with Clemson's first two chunk run plays of the game and Clemson has the ball at the FSU 20.

BrandonRink®
1:10 PM
Sean Pollard is now in at RG for Clemson.
Get the latest Clemson gear right here!
Comment on this story