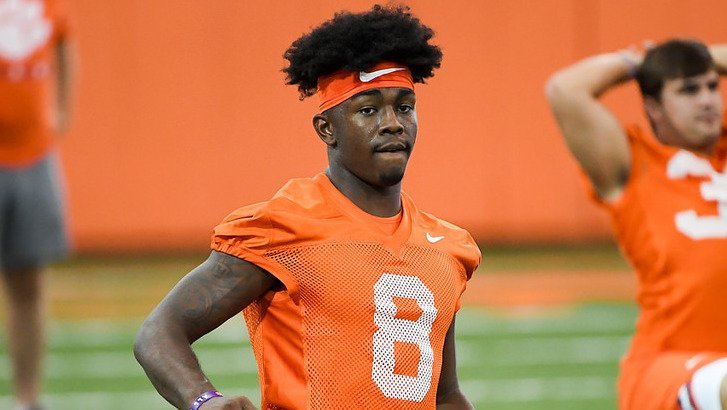 Justyn Ross is making a statement early in fall camp

CLEMSON – Justyn Ross is making a name for himself early in fall camp.

The freshman wide receiver out of fall camp drew rave reviews after Saturday’s stadium, prompting one former player to text me to say, “Ross is a full-grown man.”

Ross made a couple of spectacular catches during the scrimmage, impressing head coach Dabo Swinney, who said he has been more than pleased with what he’s seen so far.

“I didn’t know what to expect, what kind of effort guys give, how he’s going to absorb all the installation, where is he technically and fundamentally, how is he going to handle press coverage, will he stay with the play and make plays with his hands, can he run routes against Trayvon Mullen,” Swinney said. “I can’t tell you how pleased I am with Ross. He’s 207 (pounds) so physically he is in a different place than most guys. He is very confident, he is quiet, a lot like Sammy (Watkins). He doesn’t say a whole lot. He is a goes-about-his-business kind of guy. The thing that I have been most pleased with is he just works, he doesn’t say anything, he just works. He loves to be coached. When you teach him something or show him something then he will acquire it.”

“He just has a lot of natural instincts, he is a ball finisher, he’s a little bit like Nuk in the sense he is a relentless finisher,” Swinney said. “He just wants to get the ball and that’s a mentality and he’s like Mike Williams in the sense that he’s so frickin' big. He’s going to be 225 pounds and that’s about the same size as Mike, and that’s where Ross is heading. He is in a really good place right now as guy walking in at 207 pounds and can run and he’s picking it up.”

The coaches are taking it slow, however, wanting Ross to feel comfortable with the offense before asking him to do too much.

“We're not asking a ton from him right now. He is learning one spot right now,” Swinney said. “Some of those guys we have training all over the place like TJ (Chase), Cornell (Powell), and Trevion (Thompson). Let’s just start right here and then grow. Before his career is over I think he will be a guy like Mike where you can put anywhere on the field - the slot, the boundary and he will be able to function. He is not there right now, but very pleased with his effort and his coachability.”

This Clemson true freshman went up and got that ??#SCtop10 (via @ClemsonFB) pic.twitter.com/MWczb7bG0I