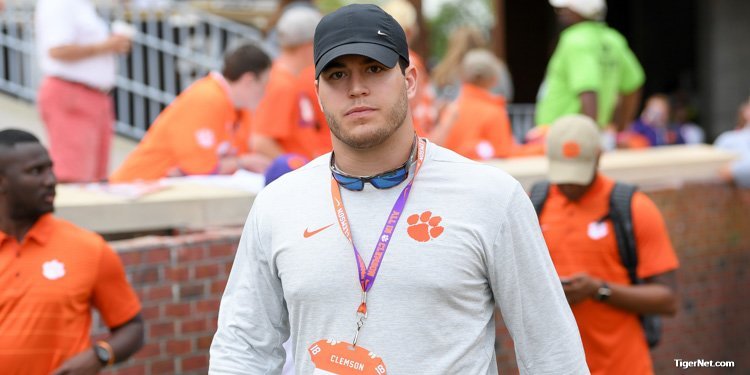 The Clemson coaches are looking for depth at tight end and J.L. Banks hopes to fill that need.

Banks was a 2015 outside linebacker prospect out of Bogart (GA) who signed with Georgia Southern out of high school. He played a year of tight end and H-back at Georgia Southern, took a year off and spent last season at Georgia Military College. He’s now enrolled at Clemson and will fulfill a preferred walk-on spot this fall.

“I was supposed to come up to Clemson on a Saturday for their camp,” Banks told TigerNet. “Coach (Brent) Venables wanted to see me as a linebacker, but I got a scholarship offer to Georgia Southern about five days before I was supposed to go to Clemson. So, I never made it up that way. Now we're back in communication and it's funny how God works things out and I am back up here a few years later and we are doing it all over again.”

He hopes to win a scholarship at some point. He is guaranteed two years of eligibility and can appeal for a third.

“Absolutely. After speaking with the coaching staff I have an opportunity as a preferred walk-on,” Banks said. “This has definitely been a journey and a scholarship is something I hope to achieve over the next few years. I am excited to work hard and I look forward to what the program is doing. I am excited. I couldn’t be more beside myself.”

The 6-3, 240-pounder chose Georgia Southern in part because his father, Jeff, won a National Championship with the Eagles. Now, the son is excited about maybe winning a championship of his own.

“I think it's exciting. When you look at a team like that the sky is the limit,” Banks said. “You have a great coaching staff and all of those guys really put it all together so well. There is so much talent all over the field. It makes you realize how hard you have to work to be a part of something like that. You have a standard and you have to be the best every day. They have seven years of 10-plus win seasons and they aren't slowing down anytime soon.”