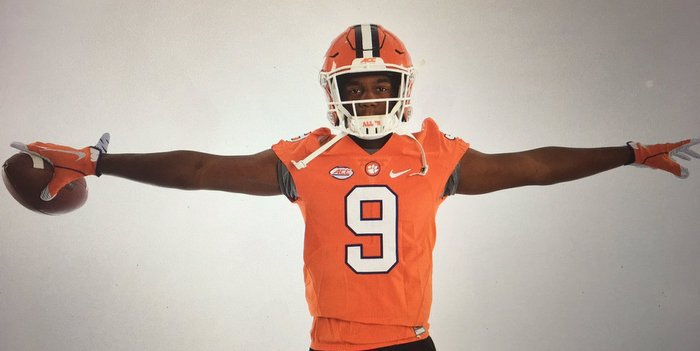 Rooks poses during his visit

Clemson could have a chance to add another Rooks brother to the Clemson family if the program decides to offer Porter Rooks, the 6-1, 180-pound wide receiver from Charlotte, NC.

Porter’s brother, Patrick, played basketball for the Tigers from 2013-2014, and Rooks told TigerNet that having his brother has helped guide him through the process and not make the same mistakes his brother made.

Rooks visited Clemson for a recent junior day, but he is no stranger to the Clemson campus. He told TigerNet that he has visited a couple of times and once this past season for the Louisville game, which he describes as extremely loud.

“It was my first time at junior day, but I have been up there a couple of times. I liked it a lot, seeing the new facility and watching the team practice,” Rooks said. “It was also really nice talking to the coaches. The game day atmosphere is unmatchable almost; it seems like. Death Valley on game day is crazy. That Louisville game, I have never heard anything so loud in my life.”

This visit for Rooks was one that really stood out, not just because of the new facility but also the full attention he had from wide receivers coach Jeff Scott.

Rooks poses during his visit "

“The facility is mind blowing and is just a wow type of thing. This may sound kind of crazy, but the slide that Dabo put in the new facility stood out to me,” Rooks said. “It really shows the fun side of Dabo, and not a lot of college coaches have that. I also enjoyed watching Hunter Renfrow practice, who is interesting to watch because of how he spends his routes. I enjoyed getting to see how Coach Scott was coaching and telling the guys what to do next.”

What is the message from Scott to Rooks?

“He just tells me to be coachable and make sure to keep a good head on my shoulders,” he said. “Our relationship is really cool. We stay in touch, and he said that he would come down and see me in the spring, probably in May. He also said he wants me back up in Clemson in the spring or summer.”

Being a member of the 2020 graduating class, Rooks has plenty of time to improve his game.

“My strength is my size and athleticism, but I can improve on my footwork and recognizing coverages,” Rooks said. “My goal for this season is for our team to get on the right track. We kind of had a rough year last season. The rest of my three years I’m going for rings for all three.”

Every athlete has someone they look up to, and Rooks has two former Tigers on his list.

“I really look up to Julio Jones, DeAndre Hopkins, Odell Beckham, and Mike Williams,” he said.

“What I’m looking for in a school is honest coaches, someone that doesn’t sugarcoat anything. That is important,” Rooks said. “I also look at how the coaches treat their players that are ahead of me. Whatever program I choose will be getting a hardworking, key player. A type of player that will do anything for the team. At the end of the day, you’re playing for your brothers and not yourself.”