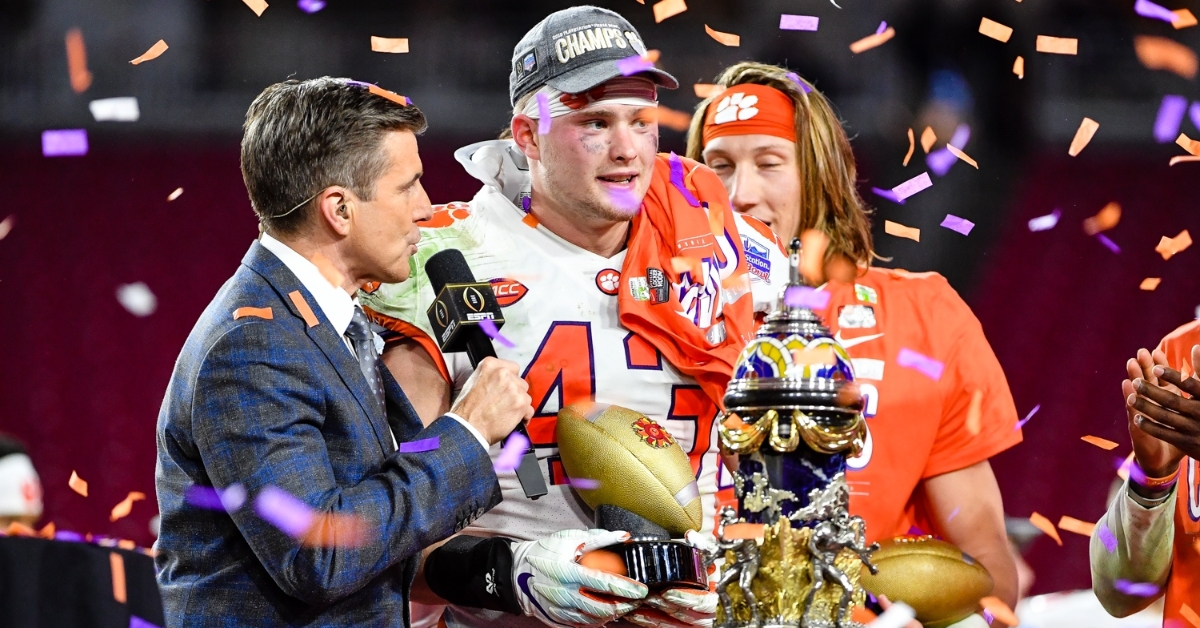 Chad Smith on stage after the win over the Buckeyes in the Fiesta Bowl.

Chad Smith stood on the stage, confetti falling around him, and cradled his Fiesta Bowl defensive MVP trophy as tears rolled down his face. All of the sacrifice, all of the hard work, all of the early mornings and late nights, were worth it.

Smith. Clemson’s senior linebacker, collected 12 tackles in the win over the Buckeyes to earn MVP honors. Smith is starting for the first time this season after arriving on campus in January of 2015 as a highly-regarded prospect.

He redshirted in 2015, spent 2016 on special teams and never played more than 135 snaps over the next two seasons. After spending the last two seasons as a backup, Smith finally got the chance to make his mark as a starter in 2019 and is third on the team with 80 tackles.

Smith is a study in patience.

“Yeah, it definitely did make it all worth it. Just the journey that I've been on, starting January 5, 2015, when I first got on campus as a freshman, having to redshirt that year, and just biding my time,” Smith said. “Being patient, and then this year getting the opportunity to be a starter and being able to fulfill that role to the best of my ability and being able to help lead this team to where we are now. To another National Championship run, and being able to be part of such a great team with players like Trevor (Lawrence) and Jamie (Skalski) and the leaders that we have and the guys on this team. It was just an emotional moment to be a part of such a great game and a great moment.”

Smith had no idea he was going to earn the MVP honors until after the confetti was already flying.

“Yeah, it definitely was an honor to be awarded the MVP. I didn't realize it until they just pulled me aside when everyone was about to get up on stage and say, you're the defensive MVP, and I said, oh, wow, that's crazy, because there's a lot of players on that defense that could have won defensive MVP,” Smith said. “We had a lot of players that had a heck of a game, and being able for me to go out there and execute the way we were supposed to execute on some of the plays out there in order for me to make those plays, it was pretty special. I mean, all this hard work and all this perseverance and commitment all came to fruition that night, being able to be recognized on a stage like that was just truly an honor.

“I wouldn't have been able to get to that position if it wasn't for my teammates, if it wasn't for my coaches who invested their time in me and coached me up, my people that came before me, the Ben Boulwares, the B.J. Goodsons, the guys that set the example what it looks like to be a leader, to be a playmaker out on the field, the Kendall Josephs, those guys that set the example for me. And then for me to be able to kind of follow in their footsteps and be able to shine in a big moment like that is special. It's definitely something that I will remember for the rest of my life.”

Smith has fought like an underdog his entire career and now must put on the mantle of underdog one final time when Clemson takes on favored LSU in the title game.

“I mean, I guess you could say we're pretty comfortable with it. We don't really look too much to like the outside noise, whether we're an underdog or whether we're the team to beat in a particular game,” Smith said. “I mean, we just focus on what we can control, focus on our preparation, and LSU is a great team. They're here for a reason. They've got a great offense, great defense, all-around team and program, so it's going to take a lot from us in our preparation to be able to have an opportunity to beat LSU in the championship. But it's definitely going to be a challenge.