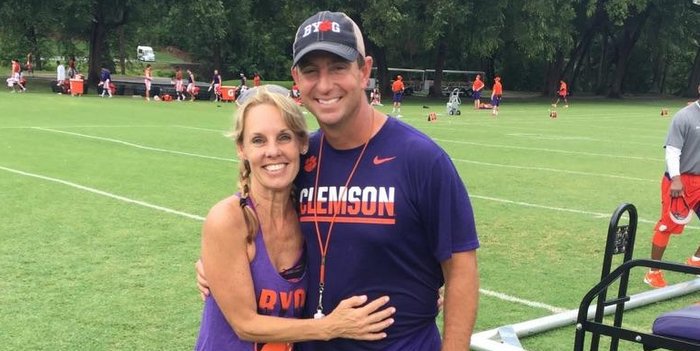 Tracy Swinney shows off a BYOG hat and shirt

Clemson head coach Dabo Swinney grabbed the attention of the nation with his now-famous “Bring Your Own Guts” speech following the Tigers’ thrilling 24-22 win over Notre Dame last October, and that speech is now being memorialized in a line of clothing that will benefit Swinney’s All In Team Foundation.

The Tigers and Fighting Irish battled for three rain-soaked hours, but it wasn’t until defensive tackle Carlos Watkins stopped Irish quarterback DeShone Kizer on what would've been a tying 2-point conversion with seven seconds left that the outcome was decided.

A few minutes later Swinney stood, with water flowing off of his hat, and delivered his speech.

“When he said all of that, I started thinking to myself that I am BYOG every day,” Van’t Hoff said. “I was thinking that saying was a lifestyle, it’s a way of life. I sat there and wondered how those Tigers must have felt, there in that moment, and giving it all they had as they got their inspiration from their coach.

A few weeks later, Van’t Hof met Mike Brown, Swinney’s agent, at a business function and pitched Brown the idea of a clothing line that would reflect Swinney’s words and the BYOG lifestyle. She wrote out a business plan on a napkin as the pair watched an NFL game. 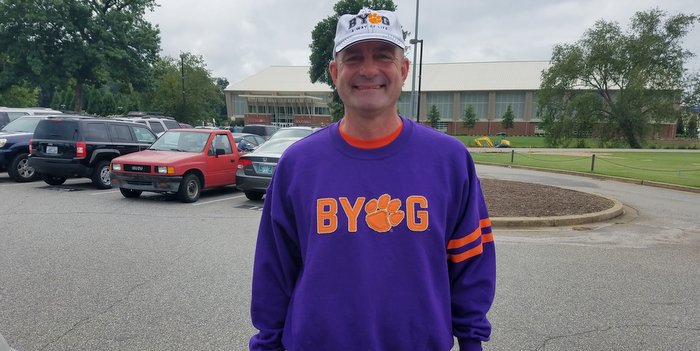 Tracy Swinney shows off a BYOG hat and shirt "

Six days after Swinney’s interview, Brown filed applications with the U.S. Patent and Trademark Office to trademark both BYOG and Bring Your Own Guts. With the mechanisms in place, Out of the Box Promotional Marketing LLC (Van’t Hof) developed an Officially Licensed BYOG Coach Dabo Swinney Product Line.

With portions of the proceeds benefiting Swinney’s All In Team Foundation, foundation representative Tracy Swinney says the marriage is a perfect fit.

“She saw Dabo’s interview after the Notre Dame game and was very inspired by what she saw,” Swinney said. “We got involved with it after she spoke with Mike Brown, and here we are. She has a whole clothing line and Dabo loved it. A portion of the proceeds go to the All In Foundation, and of course it markets Clemson, which always helps.”

BYOG branded product is now available at www.byoggear.com and will soon be available at Tiger Sports Shop, www.clemsontigers.com and also in the University Bookstore and stands at Memorial Stadium.