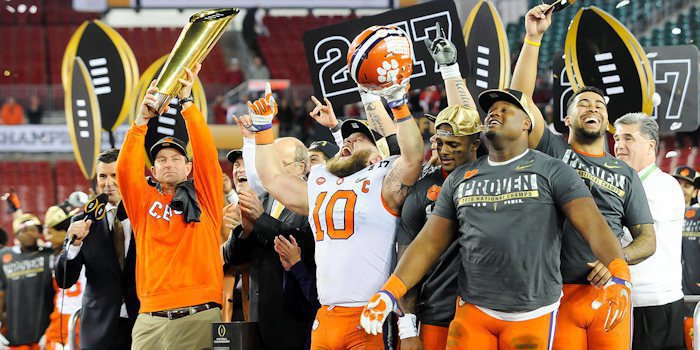 Another trophy to add to the trophy case? Yes, please

I can’t lie and tell you how good I’ve been this year. I’ve joked about “Never Again” and made fun of Dave Doeren's laptop-gate antics. I scoffed at the stupid turnover chain and laughed at the way Gus Malzahn dresses. I even cracked up when a stadium full of adults jingled their keys and made turkey gobbling sounds in an effort to sound……well…some way.

Heck, I even took a picture of the stupid scooter that they put a live chicken in down in Columbia and tweeted it out. I thought it was, in a word, hilarious.

So, yes, I haven’t been all that good.

But I do have a Christmas wish. If you could get on it and make this happen, I would be appreciative and I promise I won’t ask for anything until next season.

I want Clemson to win another National Championship.

I know, that wish was granted last year. I know there are schools that never get one, or get the chance to play for one, some of them in my own state (there I go again). But I went for a walk late on Christmas Eve, and the more I thought about it, the more I knew what I wanted.

I guess my problem was thinking. Some people say I don’t do it enough, some say I don’t do it clearly, but I do manage to think sometimes. I went for a walk late in the day, mainly to get out of the hot, crowded house and get out in the cool weather. I love walking late in the day this time of year – the winter sun begins to set in a sky full of colors, and I fall in love with the way the colors stand out in stark contrast to the deepening darkness. The way the failing light looks through the leafless limbs of the trees transports me back to when I was growing up, in states where there was often snow on the ground this time of year, and I played until the cold became too much.

Sunday night was one of those walks, and with each step, the memories of Christmases past came flooding back. Three years ago, Nikki and I had to leave our families and head to the Russell Athletic Bowl before Christmas. The media hotel sold our room out from under us, and we used a Christmas gift card to spend the night in a hotel on Christmas Eve and Christmas Day, wishing we were with our families at home.

Another trophy to add to the trophy case? Yes, please "

What a difference three years makes. Since then, we’ve been to two straight College Football Playoff National Championship Games, and for a writer who makes a living in this sport, that is the pinnacle.

I’ve covered the 1-AA playoffs (with Wofford) and I’ve covered a World Series (with the Atlanta Braves). I’ve covered plenty of bowl games and the NCAA Tournament and even went to the 2010 College World Series with the Tigers. I’ve been on the field for some big moments, but I was always sitting at home when the title games were played. The TV would pan to the press box, and I would see guys I know, and I would secretly wish that one day I could experience that feeling.

It finally happened two years ago, and I walked around the stadium during pregame like a kid who was opening up his presents. It was Christmas morning for me, and as the seconds ticked off the clock in Alabama’s win, I wondered if I would ever get the chance to cover another one. Well, it happened, and I kissed my beautiful bride as the confetti rained down in Raymond James last January.

So, yes, I am greedy and I know it. I want more. But I don’t really want it for me this time. I want it for guys like Brent Venables, who believe in loyalty instead of a big paycheck. I want it for Kelly Bryant, who has surprised me and all of Clemson nation. Kelly has allowed himself to be honest and open with the media and the fans and his teammates and coaches, and it’s refreshing. We loved and still love Deshaun Watson, but Bryant hasn’t put up any walls. He is what he is and he doesn’t care who knows it.

And, I want it for these fans. We’ve had an incredible ride for several years, and it’s gotten even better the last three years. Let’s keep it going as long as we can.

If you can make it happen, I promise to not make so much fun of Paul Johnson next season.

Thanks, Santa. See you in New Orleans.