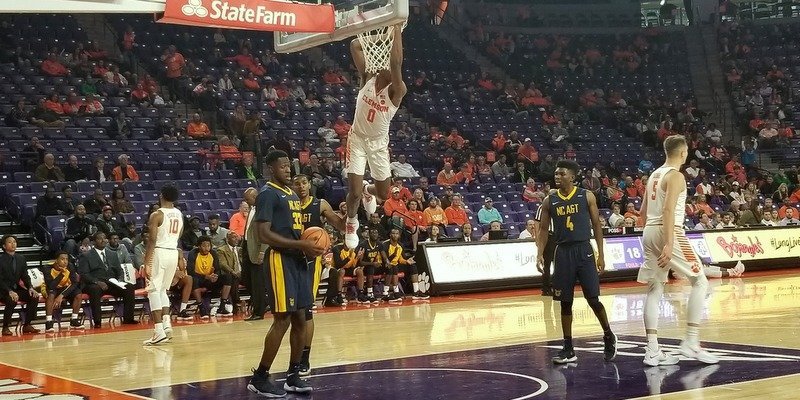 Mark Donnal goes in the for the score Sunday

The game was the first-ever meeting between the two schools. Clemson improves to 2-0 on the young season, while the Aggies fall to 1-1. The Tigers are now 35-1 all-time against members of the Mid-Eastern Athletic Conference (MEAC), including a 35-1 mark in Clemson.

Under head coach Brad Brownell, the Tigers are a combined 61-28 in the month of November since the beginning of the 2010-11 season, including Sunday’s victory over North Carolina A&T. Brownell is just seven wins shy of 300 for his career with the win over the Aggies. 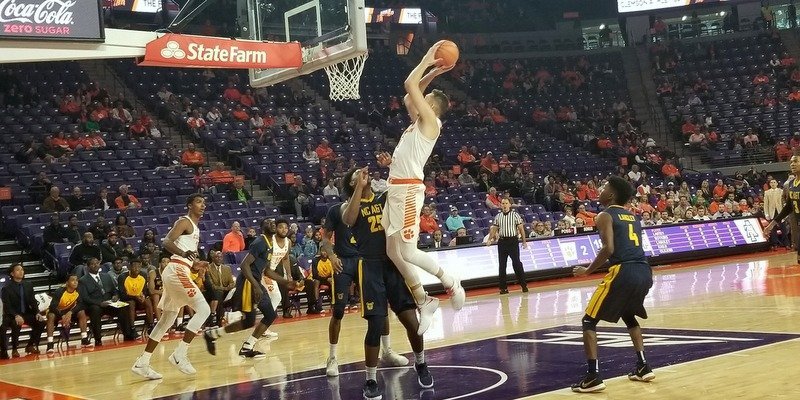 Mark Donnal goes in the for the score Sunday "

A layup by Eli Thomas with 1:28 remaining were the last points of the opening half, and Clemson took a 41-29 lead into intermission.

Clemson opened the second half on a 12-3 run, a run that included an 8-0 spurt punctuated by a Thomas dunk. Thomas was fouled on the play, hit the foul shot and Clemson led 53-32 with just over 15 minutes to play in the game.

The Aggies responded with two quick baskets that made it 53-36, but Marcquise Reed hit a 3-pointer from the top of the key that pushed the lead back to 18 at 56-38. The lead stayed at 18 until the Tigers went on an 11-0 run. The Aggies had a scoring drought that lasted a little over three minutes, and Grantham punctuated the run with a dunk after a pretty feed from DeVoe. With just over five minutes remaining Clemson led 79-50.

The Aggies continued to battle but never got closer than 24 the rest of the way.

Clemson faces Ohio Thursday in the first round of the Gildan Charleston Classic in Charleston. The bracket-format tournament features 12 games over three days. The teams compete once per day, advancing with a victory. The two teams that remain undefeated will face off in the championship game on Sun., Nov. 19. Auburn, Dayton, Hofstra, Indiana St., Ohio, Temple, and Old Dominion are the other teams in the tournament.

Clemson vs. NC A&T box
Get the latest Clemson gear right here!
Comment on this story