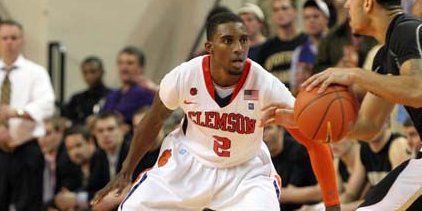 Stitt was a fierce competitor

I woke up early this morning to the news that former Clemson point guard Demontez Stitt had passed away, and there was just no way I could go back to sleep. I kept seeing “Buddy” and remembering all of the games and the interviews and the times when we would make fun of each other. Losing someone so young, so full of life and energy, is never easy.

Teammates remember Stitt as the one who kept the team loose, even in the most difficult of times. He was the first one to throw verbal jabs at a teammate who had been the subject of a coach’s wrath, and he was the first one to make fun of himself when he was the target. He was never going to let anyone take basketball – or life – too serious.

Former guard Tanner Smith said he will remember Stitt as a competitor.

“For me, I had the really great opportunity to play with him for three years and be his backcourt running mate,” Smith said. “He was one of my favorite teammates to play with. I have a lot of great memories. He was a great competitor and he hated losing. He did everything he could to win games, and he was always competing.”

Smith said Stitt showed his leadership and his heart after head coach Oliver Purnell elected to leave for DePaul after the 2011 season. As the players waited for a new head coach, Stitt rallied the players and let them know that everything would work out and that they would stick it out together.

Stitt was a fierce competitor "

“When Purnell decided to go to DePaul, we were in limbo,” Smith said. “Demontez gathered all of us around, and he said, ‘None of us are transferring. We are all staying.’ That is just who he was. He wasn’t going to run from a challenge or something that other people thought was not a good situation. We fed off of him that season. It showed a lot about his character and that he cared about the right things.

“Like everybody, I am just saddened and shocked. It’s been nice to think about all of the great memories we have of him and to share them with former coaches and teammates, but this is tough. I just want his family to know how much he meant to a lot of people. At times like this, you get to see the impact that someone’s life had on other people.”

I sat courtside at the 2011 ACC Basketball Tournament and watched Stitt score a career-high 25 points against North Carolina in the semifinals of the tournament. The Tar Heels escaped with a 92-87 victory in overtime and advanced to the ACC Championship. An exhausted Stitt missed a shot as the horn sounded at the end of regulation and couldn’t get the Tigers over the hump in overtime.

He sat in his locker with tears flowing down his face, the hurt and pain evident. Growing up in North Carolina, he wanted to beat North Carolina any time he took the court against them and the loss in the tourney semifinal was especially painful. But he fought through the tears and answered all of the questions we had, and he did it with his usual grace.

A few weeks later, he once again fought through the heartbreak of losing to West Virginia in the NCAA Tournament, and he sat in his locker, not wanting to take off his jersey for what he knew would be the last time. I walked out of the locker room with a huge lump in my throat, thinking, “This kid cared.”

He played hard every moment he was on the court. If you could have taken his heart and put it in the body of some of the more talented players that have come through Clemson, you would have an unstoppable force. His heart simply never let him quit.

On Wednesday, that same large and giving heart gave out, but we are better off for having known him and having him in our lives. His Twitter handle was “BuddyDAgr8” or, Buddy the Great. You were indeed great, Buddy, and we will miss you and your heart.

Terrence Oglesby had this to say about his former teammate.

“When people think of Demontez Stitt, they think of an elite competitor, a defensive wizard, and a super talented basketball player. When I think of "Buddy" I remember the 5:45am workouts where he would pick up his energy when he saw ours was lacking,” Oglesby said. “One thing you can always say about Buddy is that he "BROUGHT IT" every day in every facet of his life. Whether it be his energy at those early morning workouts or his friendship almost nine years after we first moved in together at Clemson. He was a top-notch human being and I am still struggling to get my head around him no longer being with us. Simply put, Demontez Stitt was the type of person you always wanted to be around. His undeniable charisma and selflessness is something that I will always admire. The Clemson family lost a Great one today and heaven got a good one. Rest in Peace, Demontez, your spirit will live on and my memories made with you will never fade.”