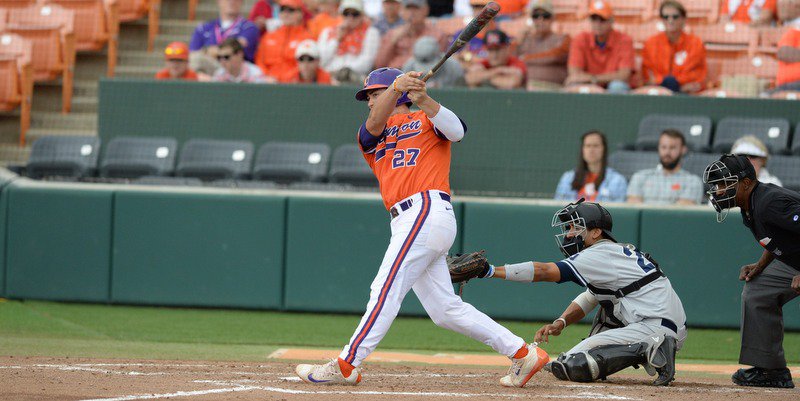 CLEMSON – Monte Lee shook up the lineup in the hopes of shaking his team out of a three-game losing streak, and it worked as No. 6 Clemson defeated Nevada 5-2 Saturday afternoon at Doug Kingsmore Stadium.

Lee moved designated hitter Robert Jolly into the leadoff spot, dropped Chase Pinder to third, dropped Seth Beer into the fifth spot and Logan Davidson into the seventh spot. The Tigers didn’t slug their way out of a slump but found enough hits in defeating the Wolfpack.

Charlie Barnes pitched six innings and picked up the win in improving to 5-3 on the season. Chris Williams homered, had three hits and drove in two runs before leaving with an injury in the seventh.

"We were fortunate to get a win here in game one. Charlie Barnes did a nice job for us," Lee said following the game. "We were able to keep his pitch count down a little bit, but he got us into the sixth inning. After giving up the leadoff home run, he settled in and threw the ball really, really well. We really pitched well today. It was good to see us throw the ball out of the bullpen and pitch well. Defensively, we played a pretty solid ballgame. There are a few things we need to clean up. Offensively, we did just enough. We took advantage in the fourth inning with a big inning. Overall, it's good to get a win in game one and hopefully, we can build momentum going into game two."

The Wolfpack greeted Barnes with a runner right off the bat, no pun intended. Justin Bridgman led off the game with a solo homer to left for a quick 1-0 lead. 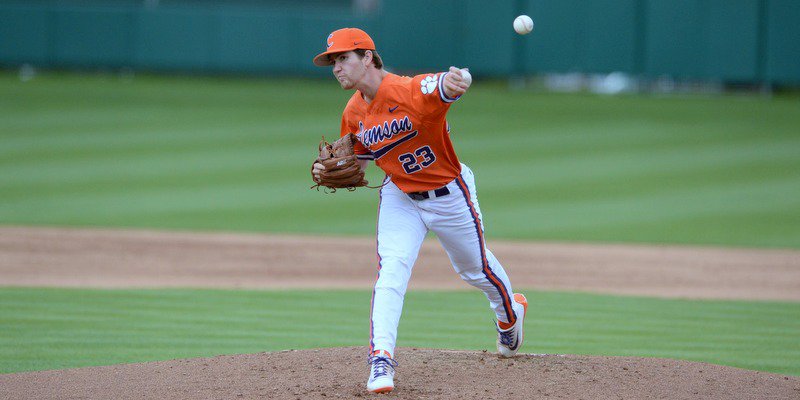 The Tigers evened the score quickly in the second. Williams homered to left on a 2-1 count, a solo shot that was his 13th of the season.

Reed Rohlman led off the bottom of the fourth with a double to center, and Chase Pinder was hit by a pitch. Williams doubled down the left field line, scoring Rohlman for a 2-1 lead and moving Pinder to third. Seth Beer singled in a run to make it 3-1, and Williams scored when Andrew Cox bounced into a double play.

Nevada got one of the runs back in the top of the fifth, a walk leading to a RBI double by Bridgman that made it 4-1.

Pinder homered to lead off the bottom of the sixth, his third of the season, and Clemson led 5-2.

Barnes' day was done after six innings. He gave up five hits, two runs (one earned), walked one and struck out seven in just 90 pitches.

Another player whose day was done after six was Williams. He was tagged out on a pickoff play to end the sixth, and he laid in the dirt by the first base bag for several seconds before being helped to his feet. He put on his catcher’s gear and went back out to warm up the pitcher for the seventh, but motioned to the dugout that he couldn’t continue.

Lee said Williams' shoulder popped on the dive back to the bag, but at this point, they don't have a diagnosis or prognosis.

"We'll see. We're not really sure right now the extent of the injury. I'll talk to our doctors and trainer in just a little bit to see the nature of what we're looking at," he said. "He's going to be pretty sore tomorrow. He's questionable for tomorrow right now until we see. It's probably going to be more of a how does he feel when he gets up tomorrow? How sore is he? Will he be able to DH or will he need to rest completely? I highly doubt he'll be able to catch tomorrow, but we'll have to just see. He just felt it (shoulder) pop when he dove back into the bag. We don't know the severity of it. We don't know the long term or short term diagnosis yet, but it was hurting him enough to where he needed to come out of the game. We'll do everything we can to get him healthy as quickly as we can."

Game two of the series is Sunday afternoon at 4 p.m. Nevada will send righty Mark Nowaczewski to the bump against Alex Eubanks. The finale of the series is at noon Monday, with Pat Krall of Clemson facing an undetermined starter.

Clemson vs. Nevada game one box
Get the latest Clemson gear right here!
Comment on this story