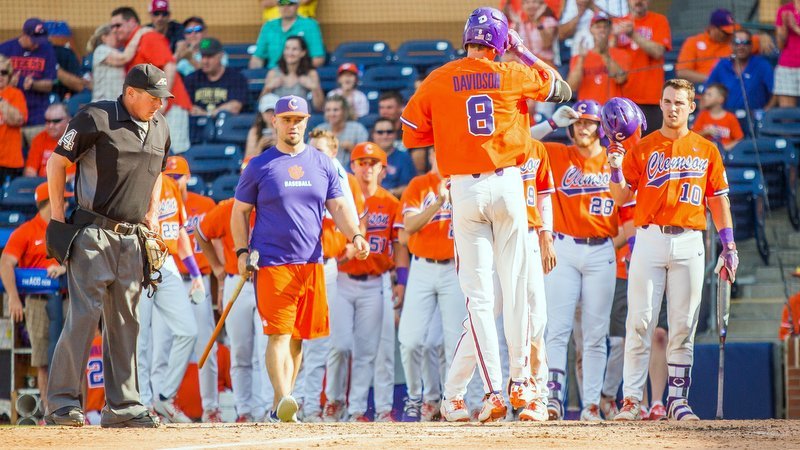 Last weekend during Clemson’s regular-season finale at Pittsburgh, the sophomore switch-hitter launched home runs from both sides of the plate Thursday night in the first game of the series.

However, Davidson wasn’t ready to stop there.

During Clemson’s ACC Baseball Championship opener against Notre Dame Wednesday afternoon at Durham Bulls Athletic Park, Davidson added to what was already a historic 17-run fourth inning by hitting a grand slam and a two-run homer, one from each side of the plate. The feat made Davidson the first Clemson player two hit home runs from both sides of the plate in an inning.

To put Davidson’s accomplishment in perspective - a major league player has hit home runs from both sides of the plate in the same inning just three times.

When Davidson stepped into the batter’s box for his second at-bat of the fourth inning, he knew exactly what pitch he was looking for and made the Irish pitcher pay for a hanging curve ball.

“Well, in that second at-bat right-handed, bases were loaded, so I was kind of expecting off speed at some point. I didn't get it earlier,” Davidson said after Clemson’s 21-4 win over Notre Dame. “I mean, I got it later than I thought, fastball, took a good hack at the first one. Second one was kind of right there, but I was, again, looking off speed, so he kind of got me there. And then I finally got that curveball. He just kind of left it up, and I took a good hack at it, and it went out. I think it hit a table or something, I don't know.

Davidson said after the game, that he was actually thinking about his at-bats in last week’s game against Pitt during the 55 minute-inning.

“I'm not going to lie, I was thinking about it. I've actually never done it until last week against Pitt,” Davidson said. “I think it was a Friday game or Saturday game. But yeah, it was kind of history for me because I've never done that. I don't think the Tigers have ever done that, as well. I mean, I've definitely never done it in the same inning before that, so that was a pretty cool experience to even have the opportunity to get back up there. That was pretty awesome.”