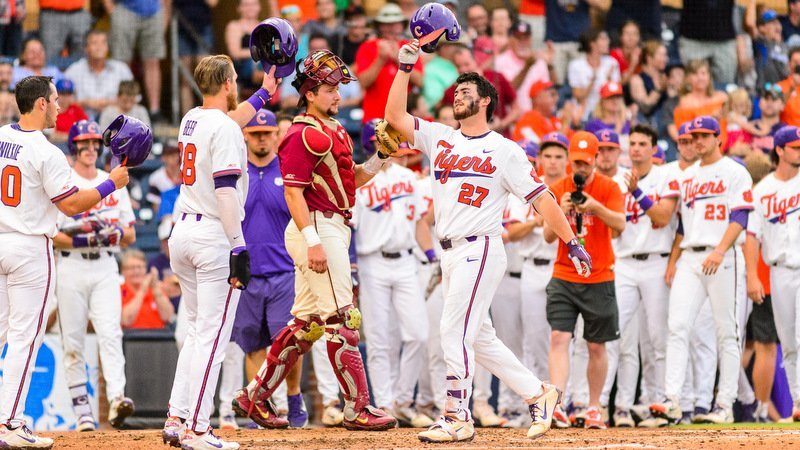 Despite losing to the Seminoles 5-4 in a thrilling Saturday nightcap at Durham Bulls Athletic Park, the Clemson Tigers have won 19 of their last 22 games and currently sit at No. 6 in the country.

Not only has Clemson been on a tear during the last half of the season, but they finished the season (including the ACC Tournament) with a record of 45-14, a feat only Stetson and Ole Miss can claim. Only Tennessee Tech – with 48 wins – has a better record.

Clemson’s record along with the fact that they play in the vaunted Atlantic Coast Conference is enough for Lee to think the Tigers are worthy of a top-eight national seed when the seedings are announced Monday at noon on ESPNU.

“Well, I believe so. We led all Power Five conferences or programs I should say in Division I baseball in wins,” Lee said after Saturday’s game. “I mean, 22-8 in the ACC, we've got 45 wins. I don't know if there's anything from a resume standpoint that would say otherwise. I think our resume stacks up with anybody's in the country. The ACC is one of the best conferences in the country, and we've had a great year up to this point, and I do believe that we deserve a national seed.”

Florida State head coach Mike Martin has seen Clemson up close for four games this season with the two clubs splitting the games evenly, and even though the Noles had the upper hand in Saturday’s contest, Martin believes Clemson is one of the eight best teams in the country.

“The league provides you every opportunity for a game like this. We have played in a number of venues such as this,” Martin said. “Maybe not quite the noise, but if you've ever been to Tallahassee, I will show you some -- let you hear some noise, because our fans provide that opportunity for us to play in an environment like this.

“It's still -- and it's a great question that you ask, because it's a whole lot different when you're playing on the road than it is when you're home, and that's what impressed me so much about our ballclub was the way that we kept our poise and so-called got it done, because that was a good club. Clemson is a heck of a ballclub, and they'll be a top-eight seed, and they deserve to be a top-eight seed.”