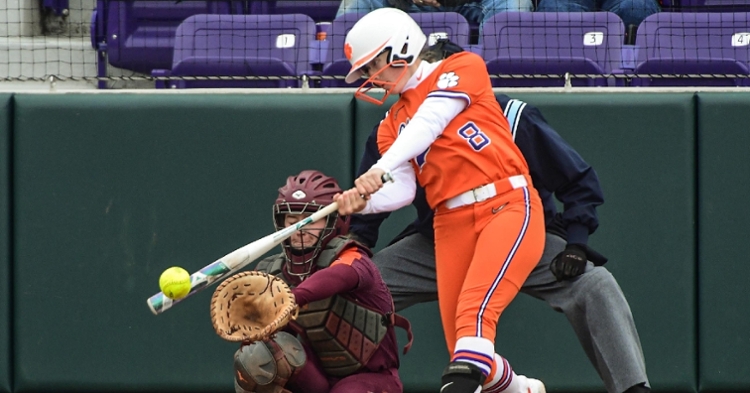 CLEMSON -- The Clemson softball team dropped both of its games Friday afternoon to No. 14 Virginia Tech at home, 9-0 and 4-1. The Tigers' overall record now stands at 3-2 and 1-2 in ACC play. Clemson will finish its weekend slate of games with three games within two days in Atlanta against the Georgia Tech Yellow Jackets on Saturday and Sunday.

“All the credit goes to Virginia Tech,” said Clemson head coach John Rittman after the doubleheader. “They kept us off balance and scored a lot of runs early and made us work from behind.”

In the final game of the series, the Tigers were unable to crack one of the best pitchers in the nation, the Hokies' Keely Rochard, after getting to her for six runs yesterday in the Tigers 8-1 win. Rochard threw a complete game, allowing just three Clemson hits and one run on the afternoon.

Clemson dropped its first game of the young season in game one to Virginia Tech, 9-0. The Tiger bats were unable to get hot and the Hokies sent two home runs over the fence, both of them driving in three runs.

Valerie Cagle recorded her first loss of the season, as both Logan Caymol and Emma Whitfield saw action in the circle in the run-shortened game.

The Hokies got on the scoreboard first in the bottom of the second in the first game of the doubleheader, scoring two runs on two doubles and a walk. The two runs were the first of the season that Valerie Cagle allowed to cross the plate (came into the contest with 0.00 ERA).

The Tigers threatened in the bottom half of the inning, putting runners on the corners with no outs, but a double play and a groundout ended the threat.

Virginia Tech extended its lead to 9-0 in the bottom of the third, scoring seven runs on six hits, including two three-run home runs in the inning. Logan Caymol made her first appearance of the season in the circle after replacing Cagle to close out the inning.

Virginia Tech picked up where they left off in game one in the first inning of the last game of the series, scoring two runs on three hits. Freshman Millie Thompson earned her second start of the season in the circle for the Tigers, recording 3.0 innings pitched, one strikeout and three earned runs.

Clemson threatened with a leadoff base runner in the bottom of the second inning, but an unusual 4-3-5 double play ended the inning.

The Hokies added another run off a solo home run in the top of the third to extend their lead, 3-0.

Fellow freshman pitcher Regan Spencer entered the game after a leadoff double in the top of the fourth, her second appearance of the season as well. With runners on first and second and two outs, the right-hander forced the Hokie batter into a ground out to get out of the jam. Spencer finished the game with one earned run in 4.0 innings of work while not allowing a single walk.

Clemson struck for a run in the bottom of the sixth, using its first two hits of the game to cut into the Tech lead, 3-1. Marissa Guimbarda picked up her sixth RBI of the season after squeezing the ball past the third baseman down the left-field line for an RBI double.

The Tigers led off the bottom of the seventh with a leadoff single, but a pop-up and a double play ended the game with the Hokies picking up the win, 4-1.

Clemson will take a short bus ride over to Atlanta, Georgia and finish its six games within four days with three against the Yellow Jackets of Georgia Tech. Saturday's game is set for 4 PM and Sunday’s doubleheader will have first pitch scheduled for 1:30 PM and 4:00 PM (all games scheduled to be broadcast on ACCNX).