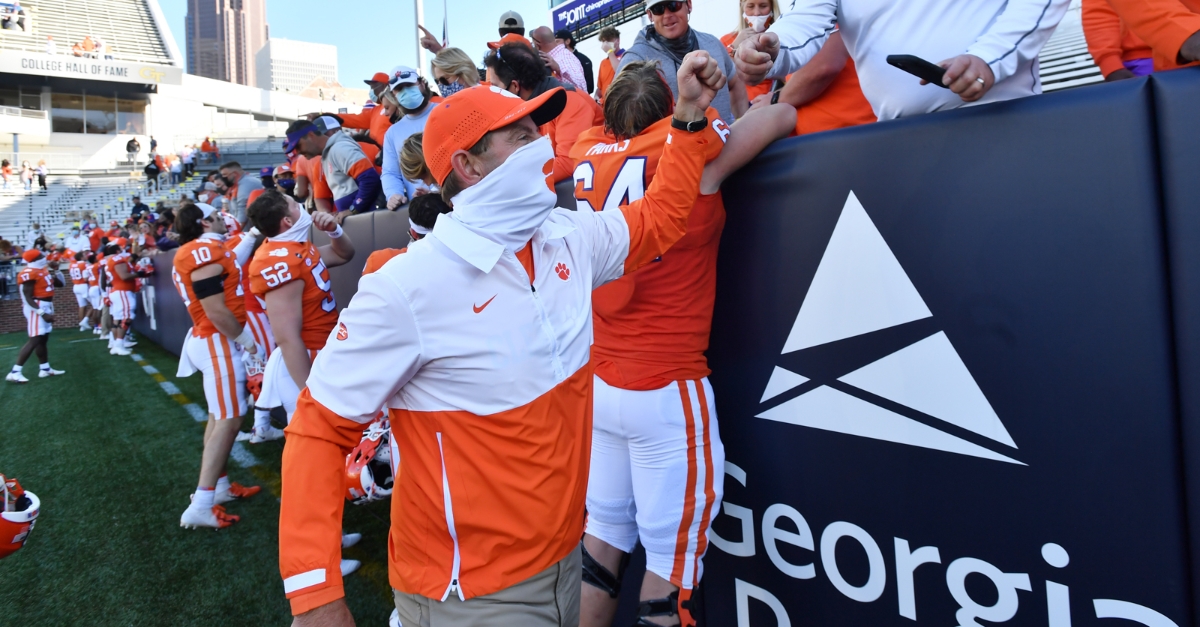 After a few early glitches – a lost fumble from Travis Etienne and an interception from Lawrence – the Tigers found their groove and couldn’t be stopped. They scored touchdowns on five straight drives after the interception. To say it went well would be an understatement. As always, we dive in to the key stats from the game and highlight what it means for the Tigers.

Lawrence played just one series (13 yards) in the second half, yet broke his career-high in both passing yards and touchdowns. Georgia Tech slowed Clemson’s running game and dared Clemson to beat them through the air. Trevor Lawrence obliged. His deep ball has become more accurate over the years and was on full display on the post route TD to Amari Rodgers that went for 83 yards. Ironically, it appeared to be nearly the exact same play Georgia Tech scored on the drive before. Additionally, his ability to consistently hit his target while rolling to the left is remarkable, and we got to see it on his 8-yard TD to Frank Ladson late in the second quarter. Despite his first interception of the season (and it was a silly one), he was exceptional, and has a commanding lead in the Heisman race.

“He’s really focused on the moment. I’ve never been around a guy that is more dialed in to today. … He is just enjoying his journey… He is just so focused on his execution and his details, his reads, his footwork, all the little things… It’s a true joy to work with him every single day. It’s special.” – Dabo Swinney

In addition to the 83-yard TD catch, Rodgers reeled in five other catches. He leads all Clemson players in receptions (25), receiving yards (429), and receiving TDs (5) on the season. It is remarkable how much he has stepped up. I honestly doubted that he could fill the void as a deep threat left by Tee Higgins and Justyn Ross, but he is averaging 17.2 yards per catch.

Frank Ladson’s upside remains tantalizing. His athleticism allows him to beat DBs routinely. He just needs to become more sure-handed. When he does, his potential will be nearly unlimited. He had a bad drop on a deep ball that hit him in the hands early in this one. Coach Swinney said “he had another routine play that he didn’t finish on.” If he can get a sharper in that aspect, he will be a star.

TE Braden Galloway didn't play much, but TE Davis Allen filled in admirably with three catches for 67 yards and a TD. Tight end play has been great all season. Clemson tight ends now have 22 receptions for 331 yards, and 5 TDs.

The Yellow Jackets freshman QB looked sharp early, but after 70 yards and a TD on Tech’s first three drives, Sims only collected 11 passing yards for the rest of the game. It was an utterly dominant defensive performance from the Tigers. Georgia Tech punted nine times. Aside from the long TD where a double move beat Mario Goodrich, the Clemson defensive backs owned the day. Safety Nolan Turner snagged his second interception of the season and collected a tackle for loss. Cornerback Andrew Booth had six tackles including a sack. Linebacker Trenton Simpson had six tackles, and Mike Jones Jr. had four including two for loss. The defense is starting to dominate like the 2018 unit, though it may be more balanced with defensive back play to match (or even exceed) the defensive line play.

I was looking forward to watching DJ Uiagalelei get a few drives with the first team offense. Unfortunately, he was held out due to shoulder tightness. That gave Taisun Phommachanh the opportunity, but he again struggled passing the ball, then injured his non-throwing hand. Walk-on Hunter Helms filled in well, throwing for two late TDs, including an exciting 35-yard screen pass to Ajou Ajou that marked the first score of Ajou’s career and the last points of the game.

Although next week’s opponent, Syracuse, inexplicably beat Georgia Tech, they will enter the contest against Clemson as heavy underdogs. They’re 1-4 and coming off a 17-point drubbing at the hands of the Liberty Flames. I’ll be the first to tell you that Liberty is building a strong athletic department. Hugh Freeze, for all his moral failings at Ole Miss, is a good football coach. Liberty won an NCAA tournament basketball game last year and has a strong baseball program too. Nevertheless, if you’re in the ACC, you don’t lose to Liberty in football… at home… by 17. It was Liberty’s first ever win against a Power Five conference opponent.

ESPN gives Clemson a 99.4% chance to beat Syracuse, and we should get to see DJ Uiagalelei play some with the first team offense. Perhaps he will play nearly half the game. It is something to look forward to in the contest.

Finally, whatever protection issues the field goal unit had against Miami appear to be resolved. BT Potter knocked through his only field goal attempt of the day. He remains perfect on field goals excluding those blocked last weekend.

Will Spiers punted three times, averaging over 50 yards on those punts. He has improved his punting and completed two passes after subbing in at QB too! He is averaging 45.9 yards across his 16 punts on the season.

No. 3 Georgia at No. 2 Alabama was the top billing for the weekend, and while it certainly delivered entertainment value, I didn’t leave thinking those are two teams No. 1 Clemson would struggle to beat. Alabama’s offense is every bit as explosive as I expected, but their defense doesn’t look all that improved from the past two seasons. Georgia’s defense is tough, but their offense offers the same traditional slog as always.

Meanwhile in the ACC, No. 4 Notre Dame just barely squeaked by Louisville 12-7 at home, and No. 5 North Carolina lost to Florida State after dropping several big catches on the potential game-tying drive. The No. 1 seed in the playoff may be especially advantageous this year as the No. 4 seed seems primed to be a less dangerous opponent than the semi-finals usually provide (I’m interested to see Oklahoma State or Cincinnati in that spot). Fortunately, Clemson’s dominance on the field continues to keep the competition at bay.