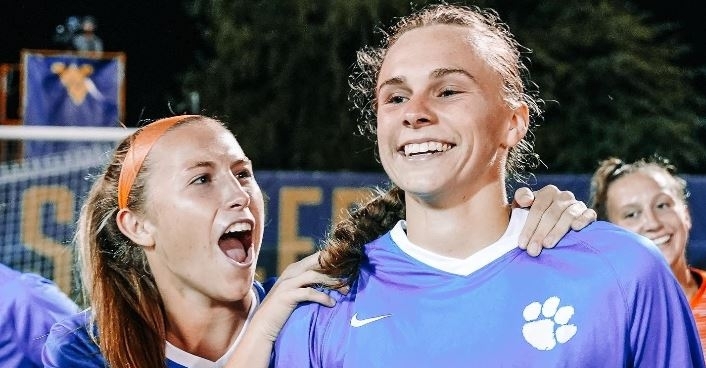 MORGANTOWN, W. Va. - The No. 18 (TDS) Clemson women’s soccer team came out on top 1-0 in a defensive battle on the road against No. 17 (USC) West Virginia (3-2-2) on Thursday night at Dick Dlesk Soccer Stadium. The win was the Tigers' first over the Mountaineers in program history, having dropped the first two meetings.

“It was a really good win on the road tonight against No. 17 West Virginia,” said Head Coach Eddie Radwanski. “To play a team like that on the road is a great challenge, and I’m really proud of how our kids came out and put their footprint on the game from the get go. The first goal came from a great ball from Makenna Morris which deflected off the Mountaineer defender and into the net, but Sami Meredith was in the right spot and would have scored the goal. We had to roll our sleeves up and get gritty in the second half. Halle came up with a huge save on the penalty kick. Our kids deserved to win that game."

The Tigers (4-1-2) started off on the right foot, creating dangerous opportunities from the first whistle. In the 10th minute, sophomore Makenna Morris served a beautiful ball into the box where Sami Meredith was ready to register a goal until the Mountaineer defender scored an own goal to avoid the inevitable Clemson attack. Both teams continued battling for the remainder of the first half, but the Tigers took the 1-0 lead going into the second half.

Clemson and the Mountaineers continued to battle until an opportunity came for the Mountaineers in the 66th minute of the match with a Clemson foul in the box. Junior keeper Halle Mackiewicz came up with a game-winning save off the penalty kick to keep the Tiger lead and secure the top-25 road win against West Virginia.

The Tigers will open ACC play a week from tonight when they host Notre Dame at Historic Riggs Field on Thursday, Sept. 15 at 7 p.m.