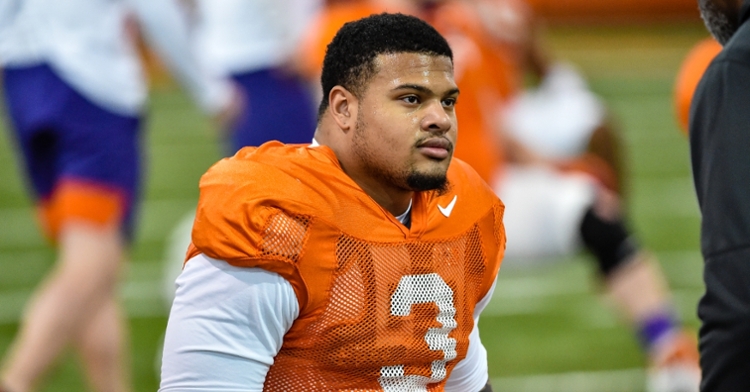 Clemson has 12 days before taking on Virginia in a rematch of last year’s ACC Championship Game, and all 12 days might be needed to get several of the walking wounded back in the fold.

Head coach Dabo Swinney met with the media Monday evening to discuss the win over The Citadel, the open date, and injuries, and mentioned that defensive end Xavier Thomas is ahead of schedule.

The following are abbreviated notes of the call, with the injury news at the beginning:

*OL Mason Trotter should be back for Virginia.

*Ruke Orhorhoro had to have surgery and will be out until at least December. They hope he will be able to play if they make the ACC Championship Game. They had to repair his meniscus. Wide receiver Brannon Spector felt fine today. DE Justin Foster is still day-to-day and whenever they doctors say he will be ready to go then he will go.

*Swinney thinks DT Tyler Davis has a good chance to be back for the Virginia game. He traveled to the team hotel this past weekend and took part. He has a good shot but doesn’t really know.

*This week, Xavier Thomas (who has been with the strength staff at practice) will be back in individual work. The next step after that will be to get him into a green jersey and then into team work. He is trending in the right direction and will be back sooner rather than later. Thomas has worked hard and is ahead of schedule. He has been grinding every day. Once Thomas realized he could play more than four games it lit a fire under him.

*Wide receiver Joseph Ngata had an abdominal muscle strain and they hope he will be ready to go this week. Nothing major.

*Trevor Lawrence played well Saturday. Only incompletion was a drop. Showed a lot of preparation by the coaches and players. Almost 100 players played. A lot of individuals got better. Scored 49 points, most in a half since he’s been the head coach. Sees development in some guys that will help down the road.

*The bad was the ball was on the ground four times, including two bad snaps.

*Played 13 linebackers and every d-lineman that dressed. Scout team did a great job last week giving them the preparation they needed.

*First shutout since 2016. Two weeks in a row great job on third down. A lot of good things, even though they get behind the secondary a few times.

*Pleased with what he’s seen – very disruptive up front. To see some of these guys developing right before their eyes is good to see. Punter Will Spiers has had two good games, and he likes what he sees in the kicking game. Averaged around 18 yards per punt return, loved what Amari Rodgers and Travis Etienne brought to the table.

*He really appreciates the fans, it was a great environment.

*Team was off Sunday and then there will be a rather normal practice schedule. Usually the team does community service during the open date but instead will have a team function. Have get-after-it practices Wednesday and Thursday, then give them Friday and Saturday off before starting on Virginia Sunday.

*He loves the way everything has been handled so far, played two football games with zero positives for COVID. Leadership has been really good. The protocol has been good and they’ve followed the rules. This will be a normal week for testing. He said even though they will be off this weekend he trusts them to do what is right. It all comes down to trust, discipline and sacrifice and minimize the risk.

*If Swinney or Brent Venables or Tony Elliott were to test positive for COVID-19, it is a secret what the chain of command would be, Swinney said somewhat jokingly. Said he has it behind glass that says, “Break only in case of emergency. It is top secret.”

*On the offensive line, the younger players still have work to do. Walker Parks and Mitchell Mayes have put in good work. Trent Howard needs a year in the weight room and they feel like they hit it out of the park.

*WR EJ Williams has great instincts for the game. TEs Jaelyn Lay and Sage Ennis are improving. On the defensive side, the young linebackers are playing well. They are all making some strides.

*He says the first TD throw (to Amari Rodgers) was an absolute dime. The throw to Frank Ladson was over the top and hit him right in stride, hard to do 50 yards down the field.

*On Rodgers, he has played some 2-man but has mostly been at the 5-man. He says Rodgers is fast and strong and lean, his footwork is incredible. He has an understanding of the details at the position and his technique. He has come a long way from a route-running standpoint. Like Trevor, the game has slowed down. He can fly and plays big. He is not a tall kid but plays big.

*He has reached out to Jeff Scott, said, “I gave up 70 early in my career so he is doing better than me. I can’t believe Notre Dame would do that to him (laughing). Tim Bourret, you hear that?”