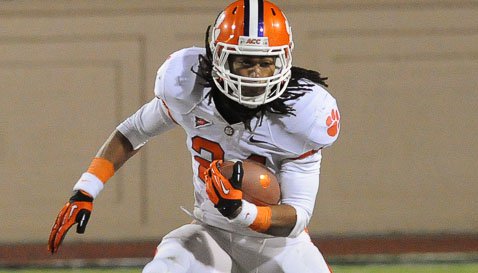 Your patience has been rewarded college football fans. Spring practice starts next week at Clemson.

The Tigers return a ton of experience all over the field - especially on defense – but there are a lot of questions that will begin to be answered this spring. In fact, there may be more questions about the Clemson offense than at any time over the last three or four seasons.

Think about it – the big, burning questions over the past few springs have really centered on the defense – new coordinator, finding linebackers, finding enough live bodies to play in the secondary, finding someone who could rush the quarterback.

Meanwhile, the offense has had a few question marks, offensive line being chief among them, but there have been known quantities at the skill positions. This year, that all changes, and this spring will be spent trying to replace the majority of the offensive yards from last season. Gone are Sammy Watkins

Who will step up? Will we really even know any more after the spring, or will most of this have to shake out in August? 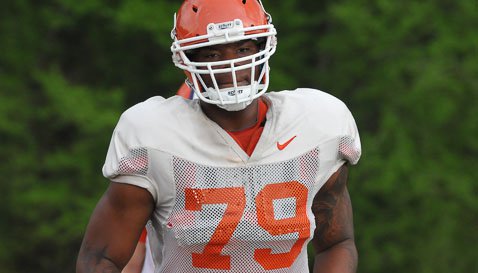 With that in mind, we take a look at five burning questions for the offense this spring.

Who will jump out at quarterback?

Dabo Swinney
Head Coach
View Full Profile next Monday to preview the spring, and one of the first questions will be if Cole Stoudt

Chad Kelly
RS So. Quarterback
#11 6-2, 210
Buffalo, NY
View Full Profile and Deshaun Watson, or if all three enter the spring even on the depth chart. My guess is that while the spring may separate one of the quarterbacks from the other two, the coaches will force the competition to last deep into August and maybe even into the season.

Stoudt has played in 22 games during the first three years of his Clemson career, logging almost 300 snaps (287). This past season, Stoudt played 116 snaps and was an amazing 47-for-59 for 415 yards and five touchdowns. Kelly played 55 snaps last season, completing 10-of-17 passes for 58 yards. He also carried the ball 16 times for 117 yards, and his highlight film play was his long touchdown run at Virginia.

The wild card is Watson - can the talented freshman do enough to make the coaches keep him in the hunt once August begins? The scrimmages this spring mean more than they have since Boyd replaced Kyle Parker

What will happen at running back?

Zac Brooks
Jr. Running Back
#24 6-1, 185
Jonesboro, AR
View Full Profile might seem like the obvious choice to take over for McDowell – he had 26 carries for 119 yards last season, an average of 4.6 yards per carry. But he has battled the injury bug throughout his career, and questions remain if he can be an every down back.

Tyshon Dye
RS Fr. Running Back
#23 6-1, 205
Elberton, GA
View Full Profile was expected to be that rugged, physical back, but a torn Achilles ended his spring before it even started, and he likely won’t be ready before August.

That leaves Brooks to battle it out with D.J. Howard

Gallman just might be the one to watch – he has the size and competitive fire you need at this level. He red-shirted last season, but was one of the stars of bowl practice. He has added weight and strength, and he looks the part of a big-time running back and could be one of those guys that surprises everybody and winds up being the starter. As a senior at Grayson (GA), he had 516 rushing yards and eight touchdowns, but showed his physical nature on the defensive side of the ball – he had 46 tackles and seven sacks out of the linebacker spot.

Who replaces Sammy and Martavis?

The quick answer is that it won’t be one receiver, but that the group of talented youngsters on campus together can come close to replacing the production lost to the NFL. The good news is that freshmen Demarre Kitt, Artavis Scott and Kyrin Priester

Kyrin Priester
Fr. Wide Receiver
#80 6-2, 190
Lilburn, GA
View Full Profile are already on campus,, and they have all spring to impress the coaches, learn the play book and gain chemistry with the quarterbacks.

T.J. Green
So. Athlete
#82 6-2, 189
Sylacauga, AL
View Full Profile . Williams, Hopper and Green all received playing time last season, but all need to become more consistent. Can they hold off the new guys? These battles will be fun to watch.

What happens on the offensive line?

Replacing Thomas at the left tackle spot will be Isaiah Battle

Isaiah Battle
Jr. Offensive Tackle
#79 6-6, 280
Brooklyn, NY
View Full Profile , who was moved to right tackle at the end of last season and was good, but not great against Ohio St. in the Orange Bowl.

Replacing Shatley? That’s anybody’s guess right now, but the coaches have said they intend to get their five best players on the field, and that might mean that center Ryan Norton

Kalon Davis
RS Sr. Offensive Guard
#67 6-5, 330
Chester, SC
View Full Profile was getting the majority of the snaps there at season’s end. Could Beasley move to right guard, effectively giving the Tigers four returning starters on the line?

Another option is Tyrone Crowder

Tyrone Crowder
RS Fr. Offensive Line
#55 6-2, 325
Marston, NC
View Full Profile , who lost weight while red-shirting last season and was impressive during bowl practices. Can he make enough of a move to challenge for that right guard spot?

Adding to the intrigue are veterans like Reid Webster

Oliver Jones
RS So. Offensive Tackle
#65 6-5, 325
Ninety Six, SC
View Full Profile , who will add their numbers into the mix all across the line. Who will be the best five? Spring practice might go a long way toward determining that question.

Will the Tigers be more of a running team?

I found it interesting that offensive coordinator Chad Morris

Chad Morris
Offensive Coordinator / QBs
View Full Profile recently spent time with his good friend Gus Malzahn down at Auburn. Malzahn’s offense last season – at least to me – was a thing of beauty. Auburn finished first nationally in rushing yardage, averaging 328 yards per game on the ground. Yes, they finished ahead of traditional ground-pounders Georgia Tech, Army and Navy.

Morris has said since his arrival at Clemson that he wants more of a smash-mouth spread, but with playmakers like Nuk Hopkins, Sammy Watkins and Tajh Boyd at his disposal, throwing the ball was the first option.

With a young offensive line, a new quarterback and a lot of new backs, this might be the time he changes from a throw-first offense to a run-first offense. Will we see that this spring?