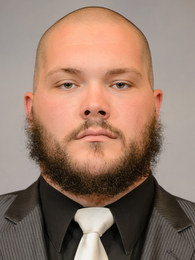 Offensive Guard
B I O
Senior who served as a reserve on the offensive line ... had four knockdowns in 116 snaps over 10 games in his career.