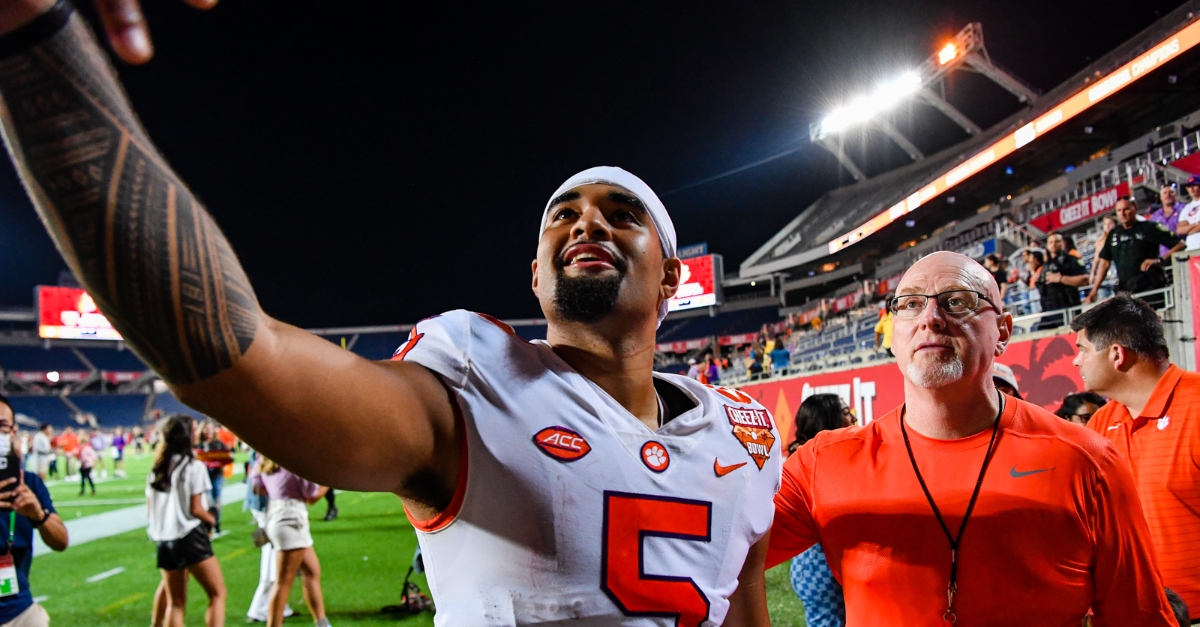 Uiagalelei has been working on his game during the break since the bowl game.

This week is one of the more exciting weeks that will happen this spring, with football, baseball, basketball, and softball dominating our attention all week long.

Spring football practice begins Wednesday and we will have interviews with head coach Dabo Swinney and selected players on the first day of practice. Following that initial practice – which the media is allowed to attend – there will be different coaches and players available for interviews after each practice session, which will be a fixture on Mondays, Wednesdays, and Fridays through early April (with a spring break in the middle).

Of course, all eyes on the first day will be on the quarterbacks. Incumbent DJ Uiagalelei will attempt to hold off freshman Cade Klubnik, while veterans Hunter Helms and Billy Wiles will try to find a spot on the depth chart. Transfer Hunter Johnson won’t be here until this summer, so it will be those four earning the snaps this spring.

Uiagalelei enters the 2022 season having completed 286-of-491 passes for 3,160 yards with 14 touchdowns and 10 interceptions over 23 games (15 starts). The former five-star prospect completed 208-of-374 passes for 2,246 yards with nine touchdowns and 10 interceptions in 13 games (all starts) as a sophomore last season but failed to throw for 300 yards in any contest. It was a rough start against Georgia in the opener and never became appreciably better.

That is why it was big news when Uiagalelei was in Texas recently to participate in the 3DQB Texas camp at Lovejoy High School near Dallas. He competed with other standout college and high school athletes, such as SMU wide receiver commit Jaxson Lavender, Ole Miss tight end Michael Trigg, Ole Miss quarterback Jaxson Dart and Baylor quarterback Blake Shapen among others. He was also able to spend time and work out with Dallas Cowboys quarterback Dak Prescott, who has been working with John Beck and the coaches at 3DQB for four consecutive offseasons.

Uiagalelei looked slimmer than he has in a while, and his motion seemed crisper. The coaches told us last year that there were times when Uiagalelei’s mechanics would drift – he threw off his back foot way too much – and the early returns out of Texas or encouraging. It will be interesting to see if that trip was his idea alone or if the Clemson coaches encouraged it.

And while football will most certainly dominate the headlines this week, baseball enters the week with a 7-0 record with four games. Clemson plays USC Upstate Tuesday for the chance to start a season 8-0 for the first time since 2018. Then there comes that big rivalry series against South Carolina – the Gamecocks are 6-1 on the season – with two games in Columbia. The first game is at Founders Park on Friday, and then Saturday’s game is at Segra Park, the home of the Columbia Fireflies. The finale of the three-game series is set for Sunday in Clemson.

In past seasons, that weekend seems to be one of the coldest of the year but the early forecast calls for warmer weather for all three games.

Men’s basketball is on a two-game winning streak and closes out the regular season with two home games – Wednesday against Georgia Tech and Saturday against Virginia Tech. The loss of Hunter Tyson and PJ Hall has had one benefit – Chase Hunter has developed the confidence that he can be a go-to guy. He scored 21 points in the win over Wake Forest and followed that with 23 in the win over Boston College.

In softball, John Rittman’s squad starts ACC play Friday with a three-game series against Virginia Tech, where both teams will likely carry top-10 rankings. The Tigers have won six in a row and stand at 11-3 after a tough early-season schedule. They host Gardner-Webb in a midweek game Tuesday (5 p.m./ACCNX).