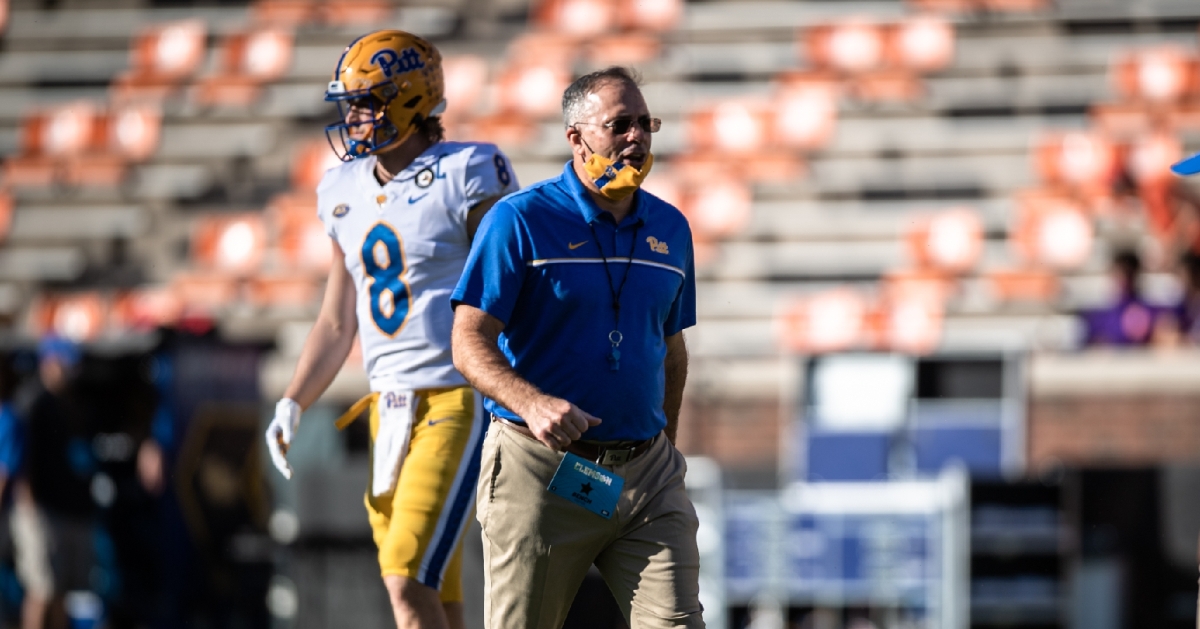 Pitt head coach Pat Narduzzi thinks that Clemson is still the standard in the ACC, especially having to play against Brent Venables and the Clemson defense.

Clemson plays at Pitt Saturday at 3:30 pm (ESPN). Pitt will enter the game with an overall record of 5-1 and 2-0 in the ACC's Coastal Division, while Clemson sits with a 4-2 record and 3-1 in the Atlantic Division.

Clemson is coming off a 17-14 win over Syracuse and is being led by their excellent defensive play. Offensively, they are struggling as they’ve only scored 20+ points twice this season, and only once in regulation (South Carolina State).

“So Clemson coming into town for the first time, feel like they are in our division,” Narduzzi said this week. “Played them, this will be the fourth time in seven seasons. It's like Syracuse; they are a crossover team, it seems like. Obviously, a great football team, and I know they are not top in the country right now, but that doesn't determine what kind of football team they have got. They are talented. You're looking at I think the top scoring defense in the country. They are playing fantastic.

“Venables has got them going on defense, and offense they’re obviously missing Trevor Lawrence, I think a lot, but they still have got a ton of players on the field. Got a lot of guys that make plays that scare the heck out of you. And all it takes is one play in this series and one play in that series, and that's all they need is explosives. They have had explosives against us before and we have to eliminate those and play great defense.

“And it will be the best challenge our offense has had all year going up against that defense. They are really good."

On Tony Elliott and seeing the same schemes as before

“Yeah, you see the same stuff. They do a lot of stuff. They do a great job of game plan. You are going to see binds, we are going to see crack-and-goes. We've seen one the last two years. I may jump off the stadium after the game if they hit another crack-and-go on us. I mean, there's things that they consistently do through games, you kind of know. We obviously didn't do a good job a year ago defending them. Tony does a great job. I mean, they do a good job of putting the players in position to make plays, and they have got to make them. So he's one of the best.”

On what makes Clemson defense so good

“And again, Brent Venables is a heck of a defensive coordinator. So he gives them that. He's an emotional guy. They play with emotion. They play with effort. They get after it, and again, they are just well-prepared. They are smart.

“And it starts with their middle linebacker, No. 47 (James Skalski). He seems like he's been there longer than Tre Tipton. He just continues to keep coming up, I don't know how many more years he's got left, but he's the computer of their defense. He gets it going and he gets them lined up and they know what's going on. They check a lot of things to formations, and it's something we have to do a good job of game planning on the other side of the ball.”

On the revenge factor for Pitt

“I mean, we wanted to rectify last week. There's always unfinished business. We beat Virginia Tech the week before, but last time -- last two times we have been down there (Pitt lost). So whatever they want to use for their motivation, doesn't matter.

“We're a different football team than we were a year ago. They are a different football team than they were a year ago. They have a lot of great football players, a lot of superstars, a lot of four- and five-star players, and we are going to have matchups. So it's an opportunity for our guys to go play against the best, and they (Clemson) are the best. They are still the gauge in the ACC, period. They are the best.”

On why Pitt is favored

“I have no idea. I don't care about favorites and points and spread and all the rest of it. Doesn't really matter in my opinion. They are favored coming into our house again. We haven't had success the last two outings. I mean, I don't know who makes those decisions. I don't know what they look at. I don't know anything. I just know they are a really good football team and we are going to have to play our best to have a chance to win.”

On Clemson RBs and OL

“It's 11 guys. You might have to hit that pass to get that thing to open up in the run game. So it just comes down to making plays, and you know, the more plays you make, the easier it is. You've got to have 11 players as one; if you have one guy that's not taking the play, it just comes down to one guy a lot of times when you look at their run game or pass game, or our run game or our pass defense or run defense. It's all -- you've got to get 11 guys playing as one, and doesn't mean they don't have good players. Doesn't mean we don't have good players. Means they didn't play and execute at a high level.”

On if having homefield advantage will help

“We'll find out Saturday. I hope Panther Nation shows up and we hope it's loud for them. Hope they have some communication issues. Ask the Panther faithful to come on out and get loud, and we need the home-field advantage.

“But you know, it's just nice to have them finally at home. We've had them down there twice at Death Valley and we've had them in Charlotte and it's just nice to finally get them to Pittsburgh. Their team has never played here. To me, there is some home-field advantage there. I'm sure they will be excited to come to an NFL stadium and put on a show. But it's our house and we've got to play like it.