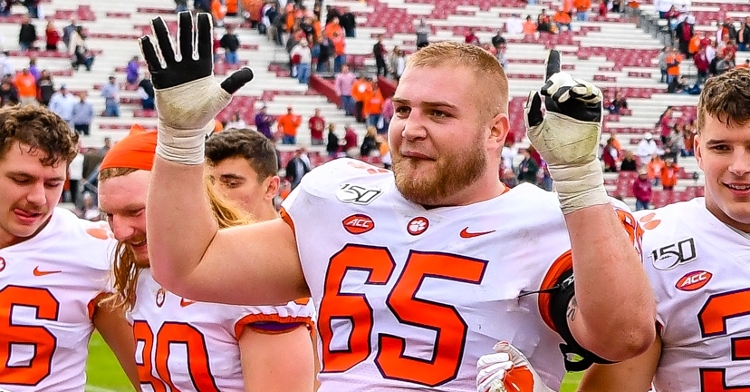 Bockhorst has the natural personality of a leader.

Matt Bockhorst is loud and proud.

Bockhorst, a rising redshirt junior offensive lineman out of Cincinnati, is penciled to step in at the left guard spot vacated by John Simpson, who was recently drafted by the Las Vegas Raiders. The Tigers have been fortunate to have a succession of talented left guards in recent memory, from Eric Mac Lain to Taylor Hearn to Simpson, and Bockhorst is ready for his turn.

“I definitely take a lot of pride in it. I am thankful for the guys that have come before me and the guys that have taken me under their wing,” Bockhorst said. “John Simpson notably. And now that it is my time, it is something I have to pay forward for the young guys. Given that we have a young offensive line group this spring, it is on me and Jackson (Carman) and Cade (Stewart) to take those guys under their wings and really elevate the level of the group as a whole.

“It's a unique opportunity to fill that spot and hopefully do a good job. Those are big shoes to fill with John Simpson, quite literally. And now it's on me. And I think that I have done what I can to prepare and now moving forward it's about performance and doing what I can to help us be the best offense in the country.”

Bockhorst enters 2020 having played 599 snaps in 28 career games (one start), including 421 snaps over 15 games last year. The offensive line loses four starters from a year ago but Bockhorst and the rest of the presumed starters all played together last season.

“Being that most of us have played with each other for at least one season, I think we went into the spring very comfortable in our communication and passing off stunts and different things like that,” Bockhorst said. “I am excited to see how far we can go. I think the sky is the limit. We have a lot going for us and it's on us to improve every single day. Having Coach (Robbie) Caldwell as your coach, he doesn't accept anything that is less than perfect. Obviously, we lost a lot of talented guys but I don't think there will be a dropoff. We certainly have a long way to go but that is why you go through the spring and then summer workouts and fall camp.”

Bockhorst’s giant personality is one of the reasons he will be looked at as one of the offensive leaders this season.

“The biggest thing about being a vocal leader is it can't be fabricated,” he said. “It has to be genuine and it has to come from a deep-down place of caring. Whether you are holding teammates accountable or singing their praises, I think the biggest thing is just being who you are. Some guys aren't vocal leaders. For me, I have kind of always had a loud personality and it's not something I am ashamed of. It's certainly a new opportunity for and I am doing the best I can to fill that void.”

What has been to his advice to the younger players on the offensive line?

“Don't freak out. You come in and on your first day of practice, it's pretty overwhelming - the speed of the game and the physicality,” Bockhorst said. “The biggest thing I've told those guys is to not freak out and just be physical and absorb as much of the offense as you can. Coach Elliott says they are feeding them with a firehose and they are trying to swallow as much as they can and it's so true. I think when we come back around fall camp they are going to find out how beneficial it was to have the install in the spring and they will be really able to take heed to it and it will pay off in the fall.”