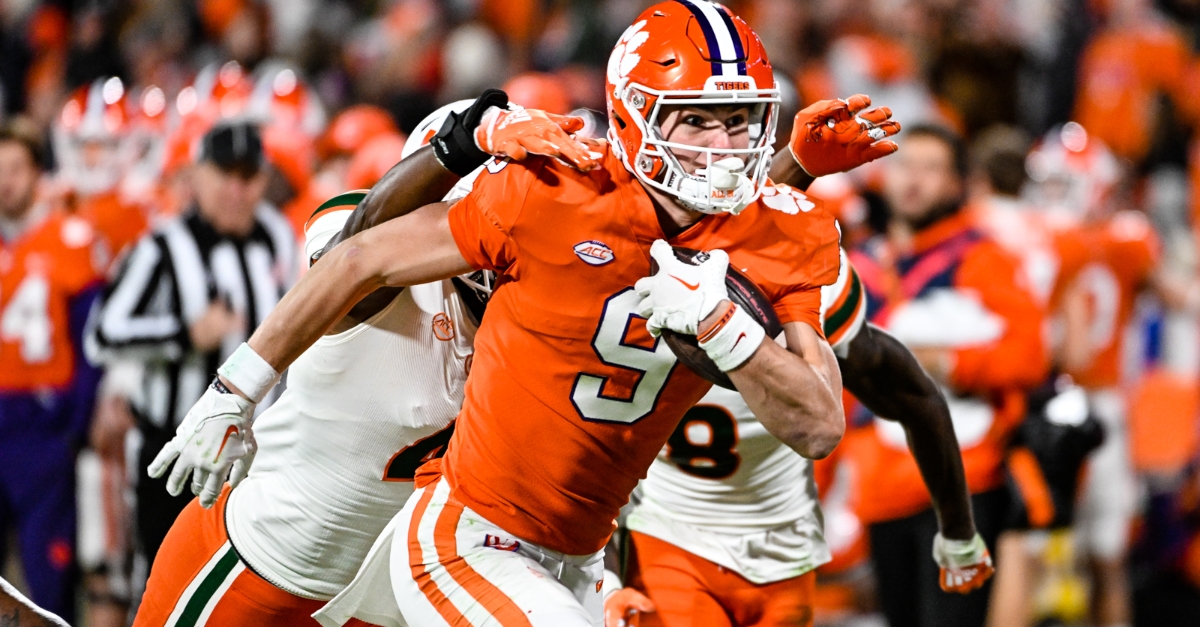 Jake Briningstool is ready to face the Gamecocks in Death Valley.

CLEMSON - As a sophomore, tight end Jake Briningstool has yet to play South Carolina in Death Valley. The rivalry experience is like no other, and that is something that Briningstool is really looking forward to Saturday (12 p.m./ABC).

“The environment and the atmosphere, it just has a bit of a different feel to it, especially being a rivalry game,” Briningstool said. “Then down on the field, you just want to do your job a little bit more, beat the guy across from you just a little bit more, just for the sake of the rivalry and what it means to so many people.”

This game is a little bit more exciting now with the Gamecocks coming off of a shocking win as a three-touchdown underdog against Tennessee last week. Despite that win, the Tigers are still 14.5-point favorites. However, Briningstool believes that the Gamecocks' win adds more hype to the game and serves to benefit Clemson.

“I think it makes it better for us and I think them coming in here hot and having a sense of arrogance about them,” Briningstool said. “I think that’s perfect for us.”

That will only be perfect for the Tigers if they are able to find some consistency on offense. Clemson scored 14 points in the first and fourth quarters against Miami last week and 10 points in the second quarter. However, the only points scored in the third quarter was a safety by the defense. Offensive consistency is something that starts with Tigers quarterback DJ Uiagalelei. He had a fast start in September and has slowed down since. Nonetheless, Briningstool and the rest of the Tiger offense are still confident in Uiagalelei as their leader.

“As a quarterback, that just comes with that position, all the criticism and everything. I think for DJ -- everything he’s gone through over the past couple two years -- I think it has really bettered him and made him a better quarterback, a better teammate, a better leader,” Briningstool said. “I think just being there for him, giving him his confidence, letting him know that it’s okay to make a mistake -- we’ll be here to have your back and I think that’s just helped him up. We picked him up when he needed it and he picked us up as an offense when he needed it. We wouldn’t be here without DJ.”

In fact, Uiagalelei was actually the leading rusher for the Tigers against the Hurricanes last week with 89 yards. Briningstool emphasizes that the key for the Tiger offense as a whole is to translate their performance from the practice field to the playing field.

“We’ve got to revert back to playing how we practice. Every single day, we get out there and practice and throw the ball around and make catches, make the plays and everything, and I think we just have to really translate that to the game,” Briningstool said. “I don’t think there’s anything wrong with our players.”

Briningstool’s performance, however, has translated to the field as he led the team in receiving yards with 57 against Miami, with 49 of them coming on one reception. With South Carolina’s passing defense at No. 43 in the country, Briningstool may have some opportunities to continue to excel at the tight end position.

Clemson has won seven straight games against the Gamecocks, which is tied for the longest streak for either team in the history of the rivalry. Ironically, Clemson also had their largest margin of victory against South Carolina on November 26 of 2016, when they beat the Gamecocks 56-7.