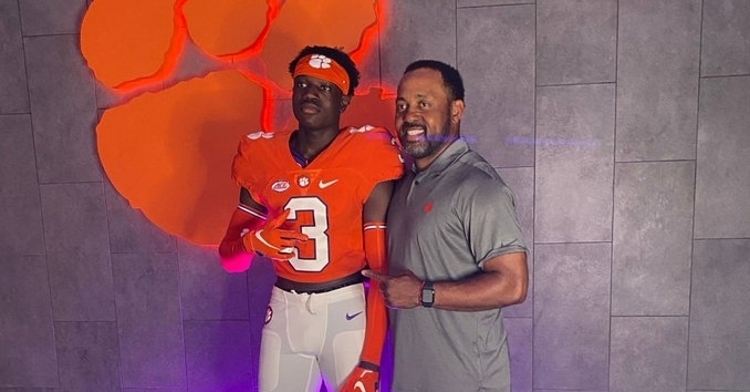 Moussa Kane is glad he made the trip from New York City to Clemson and heads back to the Big Apple with a Clemson offer in his suitcase. He is also helping build a bridge from Harlem to Clemson.

Kane, who is class of 2023, also holds a Division I offer from Purdue, where his brother Sanoussi plays. Coming off of a canceled season at Blair Academy (NJ), he said he was glad to get out of the city for a few days.

“I think it was a good thing I got out of New York. I've been there a long time, and this time of year it gets really dangerous, a lot of shootings just to shoot people,” Kane told TigerNet. “When I came down to Clemson, the first thing I noticed was the surrounding area. I didn't think this area would look like it does, and it's beautiful. The facility here at Clemson is beautiful and they really take care of their players. They have a nap room, a film room, a movie room, and their recovery room is beautiful. It's humongous.”

He worked out with the defensive backs during the Saturday session and his hard work paid off.

“A bunch of recruits were in the recovery room, and Coach Venables told me to stay back. It was me, Coach Venables, Coach Pat (Godfrey) and also Coach (Mike) Reed, the cornerbacks coach. He told us to stay back. He left for about 30 minutes and then he started giving a speech about how Clemson is a very prestigious school and they offer the least amount of people. Over the last five years they have offered the least amount of people each year, and said because they don't offer a lot of people, the bridge to Clemson is very narrow.

“Other schools that offer a lot of people have a very wide bridge. And he told me that the narrow bridge can make a stop in New York. He said Brooklyn and Queens, but I had to make sure he knew I was from Harlem, and he said that bridge can stop there because you have an offer. Everyone started going crazy. I was in one of those massage chairs and I was stuck inside the chair and I couldn't celebrate.”

However, Kane isn’t going to celebrate his offer.

“Right now, I am really happy. But I've also given myself a time limit. By tomorrow, I won't even think about my ranking or offers or anything. I am a zero-star, a nobody, again tomorrow,” he said. “I told myself before I got any offers or any rankings, I won't care about any of that because some people care about it too much and then once they get their offers they get too complacent and I don't want to be like that. I want to always be thankful for that offer.”

Clemson sits high on Kane’s radar right now, but he knows he still has time to figure things out.

“Right now, Clemson is really high. Very high. I am not sure about a decision, I have plenty of time,” he said.

@Moussak_22 attends Clemson’s Football Camp and heads back to NYC with an OFFER???? pic.twitter.com/wigu3rIKF2