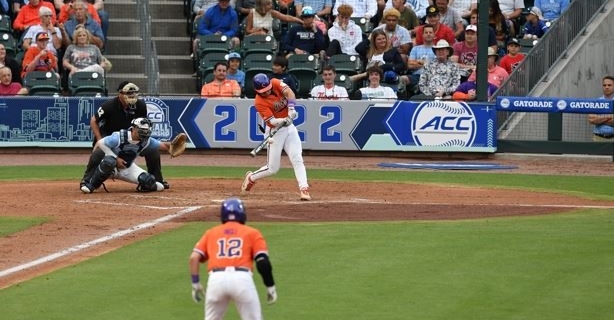 The defeat sets up a very important game with 1-seed Virginia Tech on Thursday when it comes to NCAA Tournament hopes. (ACC photo)

Clemson coach Monte Lee often says momentum is that day’s starting pitcher, and that told the story on both sides of 8-seed North Carolina’s 9-2 win over 12-seed Clemson in the ACC Baseball Championship at Charlotte’s Truist Field on Tuesday.

Anglin could have used some more help early in the game, however, as a dropped flyball from Tyler Corbitt in left field gifted the Tar Heels (35-19) two runs and a 3-1 lead after two innings.

UNC’s Mikey Madej tacked on to the advantage with a solo shot to right field in the third inning, but the big blow to Anglin’s day came in the fourth where he struggled to locate pitches and surrendered three earned runs. He was pulled after the frame, finishing with seven total runs surrendered (five earned) on seven hits with four walks and four strikeouts.

Carlson held Clemson’s best bats in check on the other side, going six innings with four strikeouts to one walk and six hits scattered. Three of those strikeouts came from ACC player of the year Max Wagner. Wagner went on to strikeout again to make Clemson's last out of the game.

“I think he competed as hard as he could. He made some mistakes,” Lee said of Anglin pitching on four days’ rest. “Offense is contagious quite honestly. They got their offense going early in the game and swung their bat well. I just think they get the momentum in their dugout there for the first half of the game. I don’t fault Mack. They hit him. His velocity was good. The velocity on all his pitches were pretty much where they’ve been all year. It is a little bit different pitching on short rest. However, even Mack if he was here wouldn’t say it was necessarily an excuse.

“They hit him and scored early and we didn’t help either. We didn’t help Mack. First two times through the order, and that’s a testament to Carlson – Carlson pitched like a No. 1 starter. And he kept us at bay. And that’s just a testament to him. Mack was going to have to be really good for us today based on how good Carlson pitched. It was going to have to be a true No. 1 starter outing on both sides and their guy was better. That's the bottom line and they were the better team.”

The loss eliminates the Tigers (35-22) from conference title contention and sets up what could be a must-win versus 1-seed Virginia Tech on Thursday (7 p.m./RSN-ACCNX) for a shot at being on the right side of NCAA Tournament bubble next week (May 30 selection show).

Clemson entered Tuesday’s action regarded as the last team in the NCAA Tournament projection for D1Baseball.com and the second team left out of Baseball America’s projection. After missing the field of 64 last year, Lee is looking to stave off the program from missing back-to-back NCAA Tournaments for the first time since 1982-86.

“Our season is on the line quite honestly,” Lee said. “We've got Virginia Tech, which is one of the best teams in the country. We get a day to recover and regroup and get ready for them. We have to take care of business on Thurday. Bottom line. We're trying to put our resume in a position to get into the postseason, and if we come out and do what we're capable of doing against a really good club in Virginia Tech and can find a way to win that game -- that certainly is going to help us...The season's on the line. We've got to come out ready to go and play our best baseball game against arguably one of the best teams in our league.”

With Anglin out, the Tar Heels added on to the lead versus Jay Dill with an Angel Zarate RBI single in the fifth inning.

The Tigers loaded up the bases in the eighth with two out but pinch-hitter Camden Troyer flied out to center field.

UNC's Mac Horvath doubled in Zarate in the bottom half of the inning, who evaded a tag at the plate.

The Tigers did find their first run since the second inning with an RBI single from Will Taylor in the ninth.

Clemson last advanced to the semifinal round of the ACC Baseball Championship in 2018 before falling to Florida State. After winning the last eight-team, pool play format tournament in 2016, Clemson has gone 4-5 in pool play games.