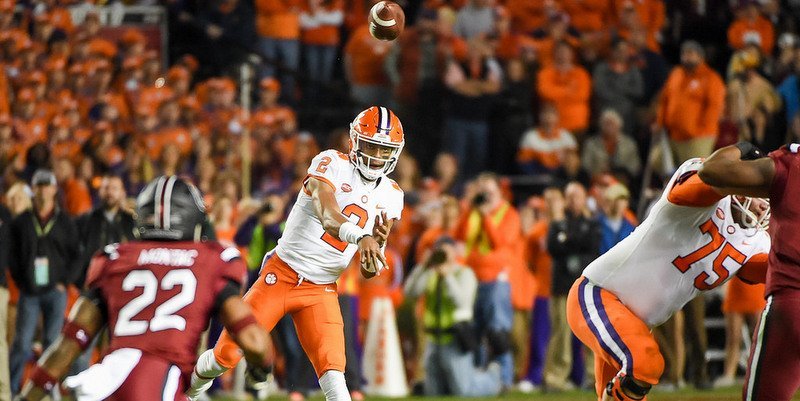 Just wanted to get your opinion on how this QB situation is gonna play out. I have been thinking and maybe that’s a bad thing lol. I think it would be tough to start another QB over Kelley B, but I think it might need to be done.

I think he trusts his legs a lot more than his arm. I think a lot of passes were not thrown that should have been thrown. And here is my thing Kelley B will do ok until the ACC Championship or the playoff we are good enough to cover up his lack in passing until then no one will expose it until then maybe Florida State but I doubt it.

Here’s the way I see it if Lawrence or Johnson start the season whoever it is they will have time to grow into and progress. We might not get as lucky as Bama did and brought them in at half time and they play great. I like Bryant he’s done great but can he make the throws will the coaches look at it like I am and make a change if he doesn’t progress in the passing game.

I really don’t see that happening. To me it’s just a tough situation, but we got a great coaching staff I trust those guys, and that’s why they make the big bucks, and I don’t.

Thanks for letting me vent a little.

You are welcome to vent anytime. I went to practice last week, and Bryant looked as good or better than the other three with his passing. He did a lot of great things last year as well. In fact, he was much better than anyone thought he could have been last year.

I do see your points though. Chad Morris was hired because Dabo wanted a HUNH offense with a vertical passing offense. Last season, the Tigers could not emphasize that aspect of the game as much because Bryant is more of an athletic QB.

The staff will play the best player and the guy that gives them the best chance to win. I think one point to consider is the other players recruited in this offense. I like the wide receivers being the focal point more. I would rather see Higgins, Overton, Ross, Rodgers, Powell, Chase, Kendrick, and Renfrow get more touches. That would be strong argument for the three other QBs because at some point I think they will be better passers than Bryant.

Remember last year Bryant was competing against Cooper and Johnson. Neither of those guys had any experience. Johnson has played a little now. Also, Lawrence is a once in a generation talent, and didn't come here to sit the bench.

This will be interesting to watch but no matter who plays, Clemson is in great shape at this position.

For the sake of my heart and my health, can we get a new closer in baseball? I am an old man, and my old ticker can’t take the constant game threatening situations. Save an old man.

It seems to always be an adventure. I am not sure if it's his makeup or his mind or confidence or if it is something physical like command. However, I agree with you. It seems like every outing is an adventure. I wouldn’t be surprised if it continues and the staff has to consider other options.

I live in Columbia and need some advice. Should I let my Gamecock brethren off of the hook or should I continue to pound Gamecock Nation with reminders of our dominance? It's almost too easy and its almost like they have called uncle. Should I have compassion? Thanks.