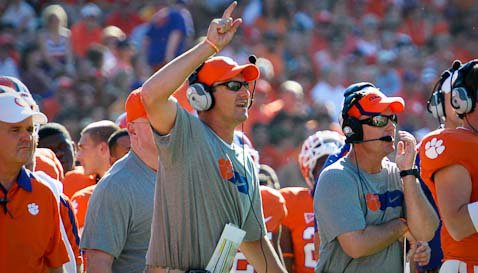 Clemson will learn this week if any players will be affected by the NCAA academic rule for bowl eligibility. Each player must pass six hours in the fall semester to be eligible for the bowl game.

Here are a few other academic standards in place throughout college football:

All Division I student-athletes must earn at least six credit hours each term to be eligible for the following term and must meet minimum grade-point average requirements that are related to an institution’s own GPA standards for graduation.

They must pass 24 hours in a year to be eligible. For example if a player doesn't pass six hours this fall and lets say only passes three hours, he will have to pass 21 hours in the spring and summer to be eligible the first four games of 2015.

Saturday we got the news that right tackle Giff Timothy was forced to give up football because of injuries. Timothy's departure means there are depth concerns heading into 2014. Isaiah Battle

Joe Gore
RS So. Offensive Tackle
#73 6-4, 275
Lake Waccamaw, NC
View Full Profile may battle it out for the other starting spot. Eric MacLain may have a spot on the two deep but could move inside. Oliver Jones

Oliver Jones
RS Fr. Offensive Tackle
#65 6-5, 325
Ninety Six, SC
View Full Profile will be a sophomore but has not made an impact to this point. The Tigers have commitments from Taylor Hearn, Justin Falcinelli and Cannon Smith but I don't think any of the three is ready to play as true freshmen. Kevin Dodd

Kevin Dodd
So. Defensive Tackle
#98 6-4, 280
Taylors, SC
View Full Profile is a defensive lineman that could move over to tackle but he lacks experience as well. A major source of concern heading into next season could be depth at this position.

Clemson moved to 8-2 with an impressive defensive performance in the win over Furman Saturday night. The Tigers will get a chance at a road win Thursday night at Auburn.

Clemson outmanned Furman on both ends but the defensive effort was impressive in holding Furman to 31 points.

A huge concern coming into this season was rebounding. The Tigers are very inexperienced in the post and I thought this might have been the biggest of the concerns early in the season. However, Clemson has been an excellent rebounding team so far. This past weekend Clemson out rebounded Furman 37-23 including 13 offensive rebounds.

A big improvement in the rebounding department has come from sophomore Landry Nnoko and freshman Sidy Djitte. The duo combined not only to go 7-7 from the field Saturday night, they combined for 21 rebounds. Nnoko had 10 while Djitte had 11 including seven offensive boards.