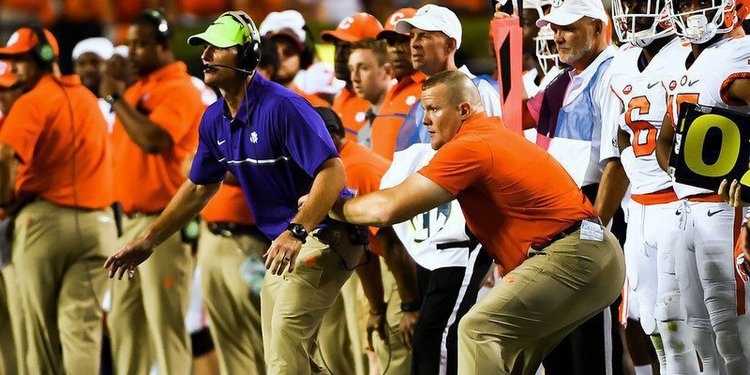 I am surprised we have seen so much three-man front this season. Why has it been so successful? Is it here to stay? Does this affect recruiting in the future? Thank you!

I think you have to give Brent Venables credit for getting his best players on the field and knowing the limitations of this team. When you lose five defensive linemen from last year’s squad, he knew there would be a drop off on the d-line. He also knew the strength of this team was the depth in the secondary. Therefore, Venables is merely getting his best players on the field. The twist that I love is Wallace at the second level and Simmons in centerfield.

The reason it has been successful is how multiple the Tigers have been. Venables has the ability to bring pressure from any of the back eight. Sometimes he doesn’t bring any extra pressure and sometimes he brings one, two or even three extra defenders.

I think there are two keys. First is the confusion it causes the quarterbacks and the protection. Second is the defensive line’s development. That first key shows the brilliance of Venables. He is able to disguise his pressure packages. The offense is guessing where to slide and protect. That second key is Tyler Davis and the defensive ends. They have been solid against the run and have contained on the edge. This allows the second and third levels to make plays.

I do think we will see more of this but as the season progresses we may see even fronts as well. Venables is the best when it comes to devising game plans.

As far as recruiting is concerned, this next class will re-establish Clemson’s dominance upfront. This next defensive line class will look similar to the class that just left for the NFL and this will give Venables more options on the defensive line.

You make a great point but I am not sure how to account for that. Maybe you could have a “team” interception. However, there are also times where the QB throws the ball right to the defender but the ball is dropped. Do we want to count those as a negative stat?

Thank you for all you have done for Clemson! I’m not sure there is any greater fan nor finer voice for our Tigers!

The booing email caught my attention last week. I have followed Clemson for a very long time and have seen the booing diminish significantly.

Our fans ARE classy and passionate. I have certainly done my part to express displeasure but have followed the fine example of almost all our fans in eliminating the booing.

Why? Because opposing players are energized by it. So many great players love to hear the boos, and I don’t want them to know we even notice them enter the field.

Also, we are showing parents of 4 and 5 star recruits what kind of place Clemson is. I think my booing paints the wrong picture. I have read stories of disappointed parents of players we wanted but did not get.

Clemson and it’s fans and reporters are the best, and it’s getting even better!

Thanks for the kind words. That means a lot to me. I try to keep an open mind and you have changed my mind. I have been guilty of booing fake injuries but won’t in the future. Thanks for your thoughtful email.

Hi Mickey! I hope you and your family are doing well, and enjoying the start of the Clemson football season!

Now that we have played 3 games into the season, Trevor Lawrence has not been perfect. But, unlike some fans, I'm not the least bit worried.

Some fans are worried that his performance in those 3 games will hurt his Heisman hopes. My thoughts on that is...., who cares?

Back in my day (70's -80's) the Heisman use to mean something, it wasn't this popularity show it is now, or whoever ESPN is promoting that week, or even what your teams win-loss record is during the season!

I mean, George Rodgers won the Heisman in 1980, his team was 8-4. That would never happen in today's Heisman voting. No more consideration for the individual who is the MVP of their respective team, no matter the teams record, or even the best player most of the time.

So, if Trevor Lawrence doesn't win the Heisman during his career at Clemson, I don't see where he lost one thing in my opinion. He will be undoubtedly be one of the greatest college quarterbacks when he leaves!!

You are correct in that the award has lost some of its prestige. It doesn’t mean what it once did. I also agree that I care about the team’s success and the program first. It would be nice to win one, but that goal is much lower in the list of priorities.