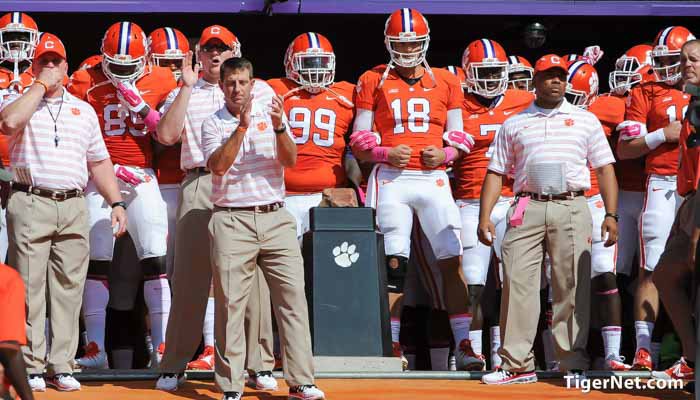 Interesting blog today about ingredients in the formula to a championship but there is another huge piece that every team must have, and that is a schedule that is good enough for people to notice but not tough enough that you can't win all the games. One of my long time golf friends always said, "you don't have to hit it hard, just hit it sweet." In football terms, you don't always have to be the best team, you just have to win all the games. Florida State did Clemson no favor by losing to Georgia Tech, but they should certainly still be highly ranked and a win against the Noles would surely help the resume. Stay away from injuries, keep winning and the championship formula will have a chance to turn into a Championship celebration.

With the new playoffs, the criteria has changed. I think there are two ways to get in now. You can go undefeated against an easy schedule, or you can afford a loss with a great schedule. I am not sure which is easier. On one hand, it is easier against as easier schedule but you have no room for a mulligan. But if you play a tough schedule it is tough to go undefeated or have only one loss. Let's see how year two goes in the new system.

I think Clemson is starting the gain the trust of the national media, which has been at the heart of the “Clemsoning” mantra. I think the Miami game helped them make that leap given Miami’s performance in their last two games. The question remains, is Clemson that good or is Miami that bad. I think it’s somewhat of a combination of both, but more Clemson being good than Miami being bad. The finish is how this team will be remembered. We can ill afford a slip up right now for many reasons. Dabo set the tone with his speech to the team at halftime that we have a standard at Clemson, and we live it every day.

I agree with you in that Clemson is the new media darling. Sports Illustrated, ESPN, Fox, CBS and several others have talked about the Tigers all week. I think Miami didn't play well, but Clemson had something to do with that. It was a perfect storm.

I made the trek down to Miami for the first time. I had some prior knowledge of their inability to get fans in the stands. However, I was shocked to see so few people at the game. If Clemson were hosting a team that was #6 in the country, Death Valley would be packed. Is it the frustration with Al Golden or is it something more than that. From a conference pride standpoint, it's downright embarrassing to see the stadium half empty. It's bad enough that we have the likes of Wake with poor attendance, but Miami has won 5 national championships and one would think they would have a solid following. What is your take?

Miami has had problems with attendance for years. My guess is that there is so much to do there that people just enjoy other things. It is a small school, and there is not a big local alumni base. The stadium is about 45 minutes from campus, and that hurts. There are a lot of complicated issues at Miami, and I am not sure they are easily fixed.

Ok, we got a goose-egg, so now we have 5 games left and have given up 100 points. I think now I revise my 120 down to 100 or less for the remaining 5 games. I will go with 85, for a total of 185 and an average of 15.4. Granted Miami lost their QB but to be able to go to their place and shut them out is a statement. Unless we lose DW, which also greatly affects the defensive flexibility, I think we run the table with one or two close ones in there and make it to the final four.

My over/under is to lose 3 on offense and 4 on defense, MAX. I could see possibly one or two more going pro if we win NC.

I don't like lifetime contracts. Situations change. People change. Incentives and motivation change. I love this staff but know that they will have other opportunities. Clemson is very attractive though and attracting good coaches shouldn't be a problem.

I read your blog, "NC State Preview" today. I think many of us still have memories of high expectations in the past that were dashed by poor preparation, over confidence, or simply being beaten by a more talented team. So, as much as I want to be confident in my 7-0 Tigers, it is still a bit of a struggle. It would be great if we all expected a blow-out and that is exactly what happened. Of course, complacency is often times the reason good teams lose. So, maybe it is good that Dabo has put so much effort into keeping the players focused on the next team.

If Clemson loses this week, it won't be due to complacency. NC State could play well, and Clemson could turn it over or have injuries, but complacency is not an issue. If they beat NCSU and FSU then pressure becomes a factor, but at this point it is not. This team appears to be focused, but every team is different every week.