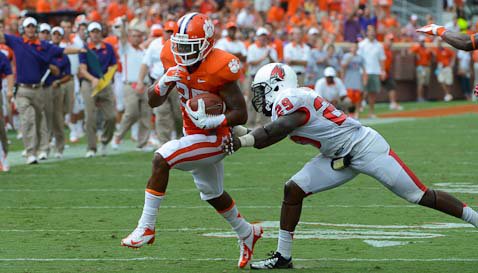 Eight with an Opportunity

Every person matures at a different rate. Everyone is giving opportunities at different times in life. These two factors are big in a college football players career.

At some point almost every college football player is given an opportunity and when that time reaches, he is hopeful he will be mature enough to take advantage of that opportunity.

Sometimes it takes a year or two or three for those factors to present themselves and for eight Clemson players this fall is that time. Often times you see an upperclassman have more of a sense of urgency than he did earlier in his career. Here are eight Tigers that should have that sense of urgency this fall:

McDowell has the biggest opportunity of his career at Clemson. For three years he has played behind players like CJ Spiller and Andre Ellington. The last two years he has backed up Ellington, who is now 4th in school history in rushing yards. This year McDowell enters the season as the number one tailback for the first time and he has shown signs being able to handle that. Last season he played 244 snaps including 44 in the bowl game which was a career-high. McDowell rushed for 450 yards last year and five touchdowns. The Sumter, SC native is up to 200 pounds and looks physically more ready to accept the opportunity in front of him.

Bryant is in the same boat as Peake entering his junior season. Bryant has shown flashes of brilliance but two things have held him back. First has been Watkins and Hopkins. Second has been Bryant's inconsistency. He might have the most potential of any player on campus, but Bryant must become more consistent and more focused. His teammates say they have seen that this summer and expect a great year Bryant. The Tigers will need Bryant to step up and help replace Hopkins' productivity.

Battle has not had a lot of opportunities yet. Last season he played 153 snaps in five games including a great performance in a Chick-fil-a Bowl where you played 73 snaps against perhaps the nation's best defensive ends. The staff thinks Battle can be a long time NFL player but the light has to come on for him. They are determined to make Battle work for every snap and not give him anything. Potential is one thing but this season the opportunity could help Battle reach the highest level with a renewed sense of urgency.

Crawford has had opportunities. He has played all 27 games this career including starting all 13 last season. He has had 827 snaps but so far has only one sack. He has the potential to have a big year but the sense of urgency must hit Crawford this season. No one has a bigger opportunity to make a bigger splash on defense than Crawford this coming season.

Christian has also had the opportunity. In fact, Christian has started seven games in each of his three years in Clemson. A veteran of over 40 games and 1200 snaps, Christian has an opportunity to have a breakout season. He has increased his tackle total 24 to 36 to 40 every year but he still has not had that major impact in the defense so far. This has to be his big year for Christian who is a senior.

Anthony also has had the opportunity but has not performed up to some of his very high expectations when he entered school. His snap total increase from 292 a true freshman to 459 last season. His tackles improved from 32 tackles as a freshman to 77 last season. But this is a former five star player who needs to play up to that level. Sometimes instincts and sometimes a lack of confidence have hurt Anthony in his pursuit to be a dominant linebacker. I think 2013 might be that year.

Steward is unlike the other guys on this list in that it has been injuries that hampered his progress. Two knee surgeries in two years has hurt this former five star player. So far Steward has played in only 18 games and has yet to make a start. He has played only 109 snaps but has been productive making 31 tackles. This is the first time we've seen Steward healthy, so this could be his breakout season.