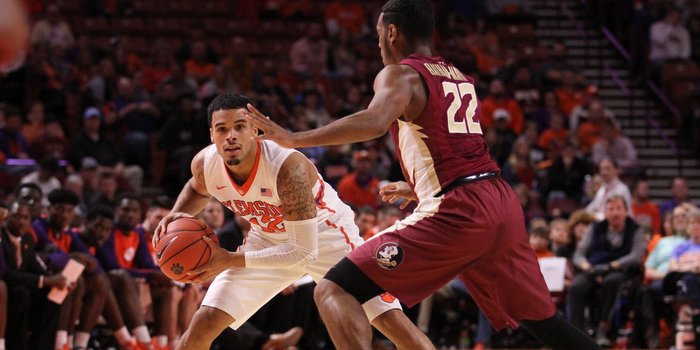 I was at the baseball game Sunday, and I sat with a former college basketball coach. Some of the conversation centered around the NCAA basketball tournament and how exciting the action had been.

We talked about Clemson's program and the future. I made my general claim that I judge Clemson football and Clemson baseball with a different set of standards than Clemson basketball. The history, tradition and support for football and baseball through the years have been outstanding. Until recently, I can't say the same for the basketball program.

The ACC has six of the Sweet 16, but it is important to note that in the first fifteen years of the ACC, Clemson didn't give out its full allotment of scholarships in basketball. It wasn't until the early 1970s that Clemson gave out its full allotment of scholarships. The Tigers have been playing catch up in basketball for decades.

Tates Locke wrote that the athletic department had two basketballs when he first got here in 1970.

However, it is important to look at schools like Miami who dropped basketball for several years and see the success they have now. So, it can be done.

I have always said that you can win in basketball at Clemson, but the margin for error is smaller than most schools in the conference. With that said, the windows of opportunity are smaller as well. So when the Tigers have a chance to win they better take advantage of it.

One of those rare opportunities comes in 2016-17. Brad Brownell could benefit from Jaron Blossomgame turning down the NBA, but I think this team will be better even if he doesn't come back to school. We have heard the three transfers are significant talents. This kind of talent upgrade could get this program back in the NCAA for the first time in six seasons.

Callers have asked me on my radio show about Brownell's future and if he has to make the NCAA tournament next season. Last week, Brownell denied feeling any pressure. I can't say that next year is a make-or-break season for this staff. But I can't see a scenario where any message can be sold heading into an eighth year without a bid next season.

I am excited about Thomas, Mitchell, and Reed. I think players like Grantham, Holmes, Djitte, Hudson, and DeVoe can continue to develop into a solid core. The team moves back into Littlejohn Coliseum, and there should be excitement surrounding the new arena.

However, this will be year seven under Brownell, and the Tigers haven't made the NCAA tournament since year one. I can't see what the branding of the program or what the message would be entering year eight unless the program is coming off of an NCAA appearance.

The good news is Brownell should have his most talented team. The bad news is the expectations should be much higher.

The ACC has six in the Sweet 16 and the NCAA tournament has been entertaining, but it would be a lot more interesting to me if we had the Tigers involved. It's time to dance.