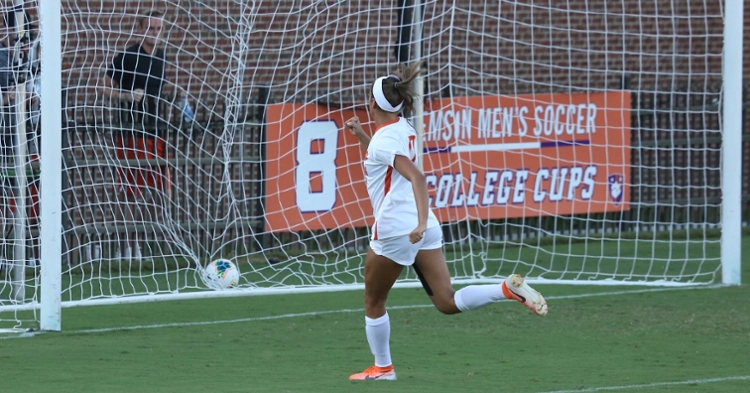 Clemson, S.C.- The Clemson women’s soccer team remained undefeated with a 2-1 victory over the Georgia Bulldogs on Sunday night on Historic Riggs Field. The 19th-ranked Tigers move to 5-0-1 on the season.

Mariana Speckmaier scored the Tigers’ first goal midway through the first half off an assist from Maliah Morris and Sydney Dawson. It marks her fifth goal of the year and her third-straight game finding the back of the net. Speckmaier led the team in goals last year with 10 and has hit the halfway point to that milestone in only six games.

Clemson started off the second half with a goal in the 48th minute. Dani Antieau headed it in off a corner kick from Renee Guion. The goal is Aniteau’s third of the season and Guion’s conference-leading seventh assist of the season.

“It’s a collective effort. Mariana is our leading scorer from last year, so she’s experienced and confident,” head coach Eddie Radwanski said. “These players with experience are the ones helping the younger team grow. We are a young group and I appreciate their efforts to keep us learning and improving.”

Georgia cut the lead in half in the 81st minute as Chloe Chapman headed in a feed from Tori Wheeler.

Clemson held on for the final nine minutes, bringing Georgia’s record to 2-3-1. Clemson outshot Georgia 15-9 with each goalkeeper making five saves. Clemson also had the advantage in corner kicks, 8-2.

“Grit is just a part of the culture. They work hard, they’re very fit, and have kind of a blue collar mentality. It was a good challenge today. We played a good Georgia team from the SEC who had an extra day’s rest and I was really proud of our performance,” Radwanski said. “To play two games this weekend in the heat, with a quick turnover and get that result. That’s a positive.”

After a week break, Clemson continues its home stint Sunday Sept. 15 against South Carolina. Kickoff is set for 6 p.m.