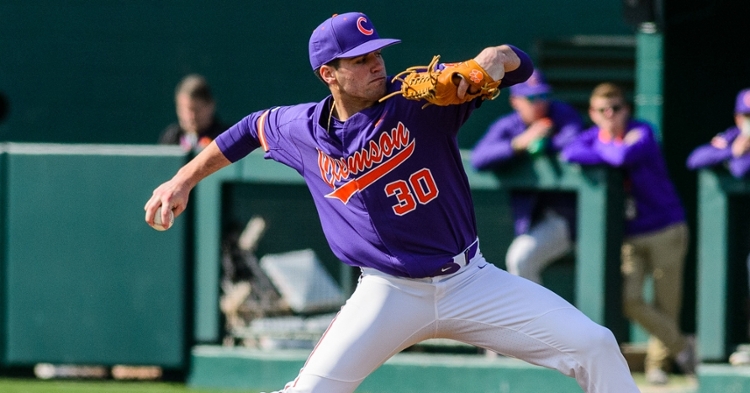 Davis Sharpe takes an 0.00 ERA through two starts into a game in Columbia.

The Tigers play their annual rivalry series with South Carolina at three different sites this weekend.

• South Carolina is Clemson’s most-common opponent in history, as the two have played 321 times dating to 1899.

• The season matchups went to a three-game, weekend-series format in 2010 after the two teams played four midweek games for decades.

• Clemson is 5-4 against the Gamecocks in regular-season, neutral-site contests since 2010.

• Clemson, who has played all eight games at Doug Kingsmore Stadium in 2020, fell to East Tennessee 5-3 on Tuesday.

• Andrew Eyster is batting .379 with two homers, Noah Campbell is hitting .348 with eight steals and Wes Clarke has four homers and 14 RBIs.

• Clemson is the designated home team and occupies the third-base dugout at Segra Park on Saturday.

• Seven of Clemson’s eight games have been decided by two runs or less.

MEREDITH GETTING ON BASE

• Sophomore outfielder Kier Meredith is doing what he has always done best…finding a way to get on base.

• He has a .571 on-base percentage thanks in large part to four walks and four hit-by-pitches against only four strikeouts.

• He has reached base via a hit or walk in all eight games.

• He is hitting .444 with a double, two RBIs, five runs and two steals in eight games (eight starts).

• He went 4-for-5 with with a double, RBI and run against East Tennessee State on Feb. 25.