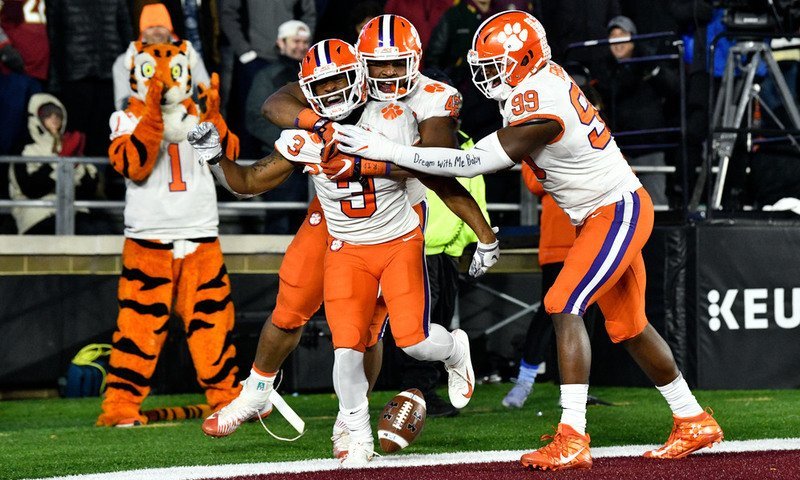 Check out the notable elements of No. 2 Clemson's 27-7 win at No. 17 Boston College and reaction from the players below:

- Clemson won the ACC Atlantic crown for the fourth consecutive season to become the first team since the formation of the conference's divisions to win four straight division titles.

- Overall, the division title is Clemson’s seventh, including a co-championship in 2012 in which the Tigers did not appear in the ACC Championship Game.

- Clemson won the first 10 games of a season for the second time under Head Coach Dabo Swinney (2015). Swinney became the first coach in Clemson history to coach the school to multiple 10-0 starts, as legendary coaches Frank Howard and Danny Ford only accomplished the feat once each, in 1948 and 1981, respectively.

- Clemson’s 10 wins this season are tied for the ninth-most wins in a season in team history.

- Clemson played its final true road game of the season and finished undefeated in true road games for the third time in a four-year span for the first time in school history.

- Clemson earned its 26th victory in its last 29 games away from home, including neutral site contests.

- Clemson won its eighth consecutive game against Boston College, dating back to 2011. Clemson’s eight-game winning streak over Boston College is its second-longest active streak against an ACC opponent (10, Wake Forest).

- Clemson has now four straight road games at Boston College for the first time in school history. Clemson had previously posted a three-game road winning streaks in the series across the 1948-52 seasons.

- Head Coach Dabo Swinney improved to 10-1 against Boston College. His 10 wins against the Eagles are tied for his most against any single opponent (10, Wake Forest).

- Clemson won the 28th of its last 29 games against ACC Atlantic Division opponents.

- Clemson defeated an ACC foe for the 32nd time in its last 34 opportunities, including conference championship games, dating back to 2015.

With a 20-7 lead after three quarters, Clemson also improved to 82-2 since 2011 when leading entering the fourth quarter.

- Clemson held a 19-8 advantage in first downs and has now posted an 83-2 record when recording more first downs than its opponent since 2011.

- Clemson has now won 64 straight games when holding teams under 23 points, dating back to 2010.

- Clemson’s eight-game winning streak in College GameDay-featured contests is the longest active streak in the nation.

- Clemson outgained Boston College, 424-113. The 113 yards surrendered by the Tigers were the second-fewest allowed by Clemson against Boston College since the Eagles joined the ACC, trailing only a 54-yard defensive performance in 2009.

- The nine rushing yards allowed are the second-fewest by Clemson this season, trailing the team’s performance at Florida State (-21).

- With 129 rushing yards on offense, Clemson outrushed an opponent for the ninth time this season. The Tigers have now outrushed opponents in 20 of their 24 games since 2017 and are 20-0 when outrushing opponents in that time frame.

- During the contest, Clemson surpassed 5,000 yards of offense on the season, the 15th 5,000-yard season in school history.

- Clemson forced 12 Boston College punts, matching the most by a Clemson opponent this season set at Wake Forest and at Florida State.

- Quarterback Trevor Lawrence posted career highs in completions (29) and pass attempts (40) for 295 yards with one touchdown and one interception. Lawrence was the recipient of the Leather Helmet Award as the game’s most valuable player as awarded by the Boston College Gridiron Club.

- During the contest, Lawrence broke Deshaun Watson's school record for total offense by a true freshman (1,666 in 2014).

- Lawrence recorded his first career rushing touchdown on a six-yard scoring rush in the third quarter.

- On his first carry, running back Travis Etienne reached 1,000 rushing yards on the year. His 1,076 rushing yards this year represent the 21st 1,000-yard rushing season in school history.

- Etienne reached the 1,000-yard rushing milestone in his 10th game of the season to mark the ninth time in school history that a Clemson player has rushed for 1,000 yards in a season in as few as 10 games.

- During the contest, Renfrow (172) passed Rod Gardner (166) and Derrick Hamilton (167) for sixth on the school's leaderboard for career receptions.

- On a 13-yard reception in the first quarter, Renfrow tied Artavis Scott's team record of 38 consecutive games with a reception from 2014-16.

- The game was Renfrow’s 42nd career start, tying him with Terry Smith (1990-93) for the most career starts by a wide receiver in school history.

- Clemson opened the scoring with a 30-yard field goal by kicker Greg Huegel. Clemson has now scored on its opening drive in back-to-back games for the first time since a four-game stretch last season against Virginia Tech, Wake Forest, Syracuse and Georgia Tech.

- Huegel added a 23-yard field goal in the second quarter with which he passed Jad Dean (51 from 2003-06) for sixth-most career field goals in school history.

- The punt return for touchdown by Rodgers was Clemson’s first since Ray-Ray McCloud returned a punt 77 yards for a touchdown against NC State on Nov. 4, 2017.

Including the punt returns for touchdowns by Rodgers and McCloud during the last two seasons, Clemson has now recorded a punt return for touchdown in back-to-back seasons for the first time since a five-year stretch from 2003-07.

- Defensive tackle Christian Wilkins made his 40th career start to tie Jim Stuckey's school record for starts by a defensive tackle, set from 1976-79. (Note: Wilkins has also started at defensive end in his career but is currently listed at tackle).

- With a sack in the third quarter, defensive end Clelin Ferrell moved past Adrian Dingle and Keith Adams (23.0 each) for sole possession of fifth-most career sacks in Clemson history.

- Official temperature at kickoff was 34 degrees, making it the third-coldest game in Clemson history and the coldest game at kickoff since a 32-degree game against Louisiana Tech in the 2001 Humanitarian Bowl in Boise, Idaho.