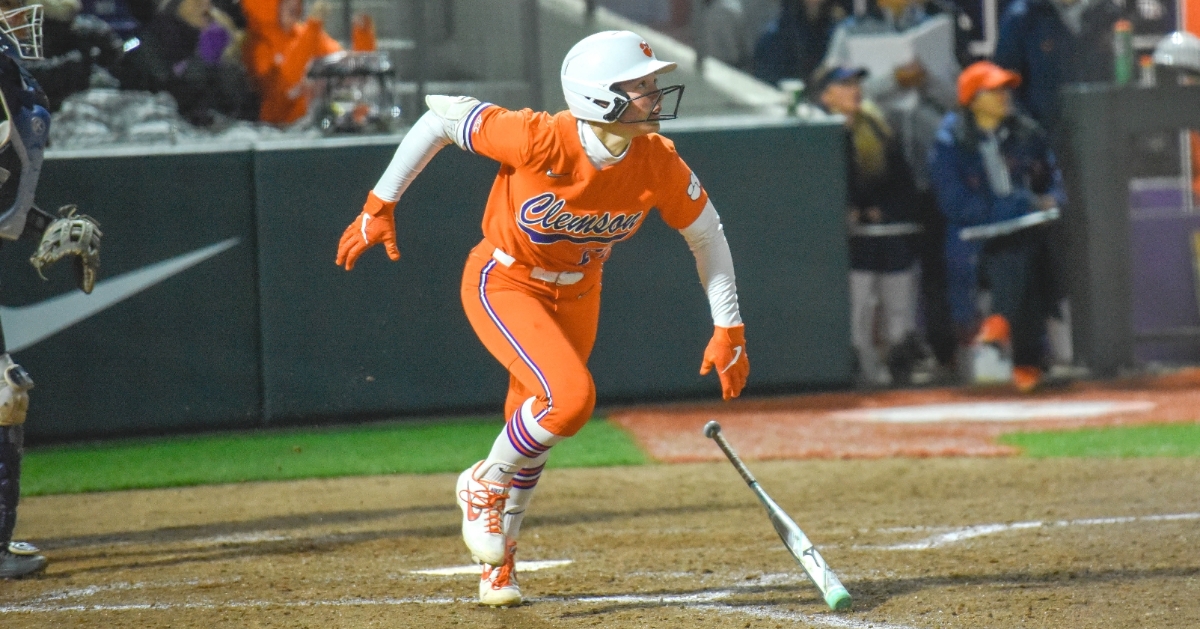 Cagle is excelling on the mound and at the plate.

CLEMSON -- Clemson softball coach John Rittman couldn’t ask for a better start to ACC play -- or to an inaugural season for that matter.

This week’s home slate featured a win over No. 14 Georgia on Wednesday and then a sweep in the Tigers’ first-ever ACC series over Virginia -- a 12-3 win in six innings Sunday clinching it -- extending a six-game winning streak.

"It shows that we’re here," Clemson freshman starting pitcher Valerie Cagle said of the impressive conference start. "We’re not just here to be another team. We’re here to make a statement and be a competitor in the ACC."

Clemson’s bats started slow Sunday but heated up in the third inning to put the game out of reach.

The Tigers’ first leadoff batter reached base in Marissa Guimbarda on a throwing error and Hannah Goodwin followed that up with a single. MK Bonamy continued a big week by going opposite field for her second home run of the season to put Clemson (14-7, 3-0 ACC) on top 4-1.

Virginia’s troubles on the mound and in the field worsened from there as Clemson would load the bases and Cagle would earn a share of the team in home runs with a grand slam to center.

The Cavaliers (8-8, 0-3) threatened in the fifth by loading the bases with no one out, but Cagle was able to induce a flyout and then turn a 1-2-3 double play to end the rally before it began.

Virginia would break through in the sixth after putting two in scoring position to lead off the frame, scoring both to make it a 5-run game.

The Tiger lineup found its stride again in the bottom half of the inning with four hits producing four runs -- the exclamation mark coming from Cagle with her second home run of the game in a three-run shot to left centerfield to bring in the mercy rule (eight run-lead after five).

"Big weekend. After taking the first two games of the series, we talked about they were going to come out with some energy and give us a fight," Rittman said. "They didn’t want to be swept and that was very evident in the first inning where they kinda scratched out a run on Valerie. Our team has been really swinging the bat well -- led by Valerie...I was very proud of how our team competed all weekend. To get a sweep in our first ACC series was pretty special. And really, Cagle -- Georgia, Friday night, tonight -- hitting, pitching -- if she’s not ACC player and pitcher of the week, I don’t know what she has to do. I’m just proud of her and our entire team."

Cagle went into Sunday leading the ACC in RBIs (now 29) and second only to Guimbarda in home runs (now team-leading 9), finishing the day 3-for-5 at the plate with seven RBIs. Cagle went the distance in the circle as well in allowing three runs on seven hits with two strikeouts and two walks.

Cagle said her debut has been a whirlwind.

"It’s really cool but it’s also crazy," the Yorktown, Virginia native said. "I never thought that (by) week four I would be leading anything in the country or the ACC."

"She’s very talented and she’s probably very humble, but she’s a very gifted softball player," he said of Cagle, who hit .692 for the series with three home runs and 11 RBIs. "She’s a five-tool player and if you throw pitching in there -- you just don’t see these type of athletes very often. She can throw up, down, change-up in the circle with velocity. As a hitter, she can spray the ball all over the park. She has power to all fields. She’s fast when she turns it loose. She’s got a great arm. She plays defense. There’s just nothing she can’t do."

The win Sunday was a ninth in a row for Clemson at home after dropping the home debut versus Western Carolina.

"Not a lot of people get to play with a crowd like this," Cagle said. "Especially being a first-year program. It's super cool to have all the fans out here early because they're so excited about what we're going to do."

Clemson vs UVA Box Score
Get the latest Clemson gear right here!
Comment on this story