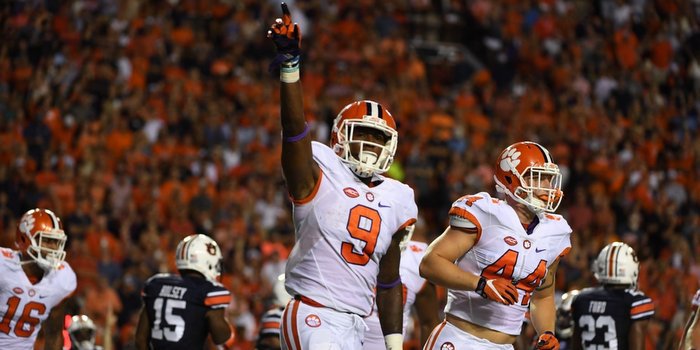 The Louisville game feels eerily like the FSU game when Jameis Winston came in here as a freshman and lit us up for 51 points. The difference is our QB. Then we had Tahj who tried to do it on his own and now we have Deshaun who understands how to use his weapons. What has me concerned about this game is can Deshaun make the long throws when needed. We are not the dominant team in this game and the margin of error is anorexic, so every possession counts. If he gets the long ball, we need to connect. Tell me if you disagree, but it seems he is missing more of those throws than he did last year. Don’t know if he is pressing or what, but we will certainly need to stretch the field Saturday night to open the run game. The offense has to deliver because Jackson will wear down the defense.

You are right, Watson has not been accurate with the deep ball but will need to hit at least one Saturday. I think he has put too much pressure on himself and needs to relax and have fun again.

All summer this year the next game of the century was supposed to be the Clemson-Florida State game in Tallahassee on October 29th. Louisville threw college football a curveball when they destroyed FSU 63-20. To me, Louisville has not had the target on its back yet, while Clemson has had to carry that burden around with them. How will the Cardinals handle being the favorite?

You are also right when you say Clemson's offense will have to respond. My guess is you will have to win a high scoring affair.

I have a question for coaches like Petrino who take players dismissed from other schools by saying they deserve a second chance. What about all of the hundreds of good rule following kids who wanted to play for Louisville that were never given a first chance? The answer is obvious. Since they have college experience Petrino figures they can help him win and that is all that matters to him and the Louisville athletic and university administration.

I didn't think of this in those terms, but you make a lot of sense. Very good point. Thanks for sharing.

Is Deshaun Watson really a first round pick for the NFL? Is it possible that he will back at Clemson if his NFL draft status drops? Sadly, Lamar Jackson looks much better this year than he does so far.

I think Watson has not played up to his potential so far this season, but I don't think he has dropped out of the first round. I am reminded of what a Clemson assistant coach told me about the draft a few years ago. He said the NFL is always evaluating, but the process really doesn't begin until after the season. Combines, pro days and team visits are the biggest part of the process and that happens after the calendar year.

Let's first agree that Georgia Tech is no Louisville, but the first half of the game in Atlanta was about as well as I have seen Clemson play in a long, long time. What does the success in Atlanta especially on defense, have to do with this week's game, probably very little. A agree with the comparison of Lamar Jackson to Mike Vick, except Jackson is faster, and was in Jacksonville and had to endure the beat down Vick and his Hokies put on Clemson in the Gator Bowl. What does that game against Mike Vick have to do with the game against Louisville, nothing and everything.

Clemson has what could become a great defense but all they have to do is look at how teams struggle against Deshaun Watson and the task against Louisville is crystal clear. What Brent Venables tries to do against Louisville will be huge because containing Lamar Jackson is no doubt the key to the game on the Clemson as of course containing Watson is the key for Louisville. Stack the box and Jackson throws over the top, sound familiar to what opponents of Clemson see?

Tony Elliott and Jeff Scott have got to figure out a way to run the ball or it could be ugly early. While watching the Texas A&M - Arkansas game Saturday night, it was never more apparent that coaches are stubborn and hardheaded. How can you explain the goal-line stands that A&M made against a team that is known for the run except that the Hogs just thought they were big and strong enough to run the ball. Thinking like that on the Clemson side Saturday night could be a fatal error and opening up the playbook is just something that it appears Clemson must do because you can rest assured that Louisville's book will be wide open. Biggest game ever at The Valley, tee it up.

I agree. The running game is bigger this week. It is time for the offensive line to assert itself. Balance is a key, and both of these defensive coordinators would love to make each offense one dimensional. I think the team that runs the ball better wins Saturday night.