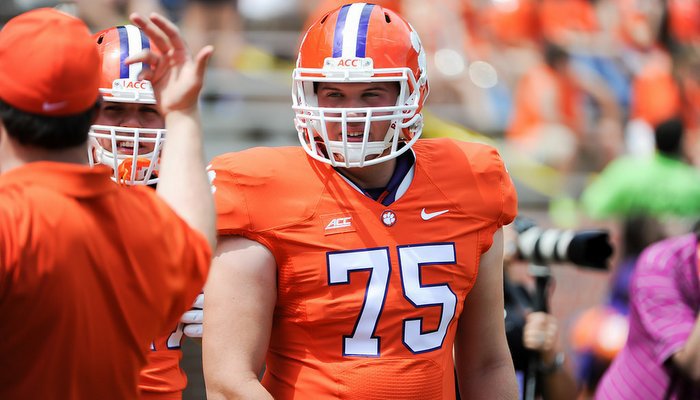 After following recruiting for as many seasons as I can remember, I have not seen more emphasis being placed on the big uglies. Traditionally, the buzz has been all about the skill positions and a defensive windfall. The last couple of seasons the buzz is more about the O-lineman and I love it. 2017 looks to have some excellent prospects in Trey Smith and Noah DeHond. We would occasionally see a splash with top lineman, but that changed with the 2015 class. I think the ability to recruit nationally and recent success all have something to do with it, but I wanted to get your take from the staff’s perspective. I wonder if Chad wanted to recruit a different type of lineman, smaller and quicker. I sense a bit of a shift in philosophy here.

The biggest jump in Dabo's program is on the line of scrimmage. The defensive line has been as good as anyone in recent years, and the NFL draft shows that. The big jump this past year was the offensive line. This coming season it could be even better. Chad wanted these types of players, but they missed on so many great ones. Mitch Hyatt was a game changer, and I think it will make it easier in the future.

You hit the nail on the head! I joked that if I ever was elected to the State House I would draft a bill requiring Clemson to play on the road all over the state. I think Clemson should rotate around the state playing these schools every other year or so. I live in Rock Hill and know if Clemson came to town to play Winthrop it would be like a home game for Clemson. It is not only beneficial to the fans but like you said it would be very advantageous to Clemson.

Thank you for bringing up what I have been thinking for years. I hope you don’t have to run for office to make this happen!!

After the two-game set in Charleston Monte Lee was asked about the trip, and he said Clemson will be back in Charleston, and he would like to see his team play at Coastal Carolina as well. I asked Clemson's recruiting coordinator Bradley LeCroy about the trip and how it affects recruiting. LeCroy said it was nice to get in front of prospects in the low country, and he thought it would benefit their efforts. Clemson recruits the Charlotte area hard also, so Rock Hill makes sense. Lee puts a ton of emphasis on recruiting and recruiting in the state. He said Clemson will win this state in recruiting. Therefore, I would expect to see more trips across the state in the future.

I missed your blog a couple of days this week. Hope you were OK. Go Tigers!!

Thanks. I had planned on doing four this week, but early in the week, a bad back put me down for a couple of days. I also went to Charleston for both games in the baseball series and enjoyed a "Spring Break." This time of year I want to do three or four a week, but sometimes things do come up. Thanks for the kind words.