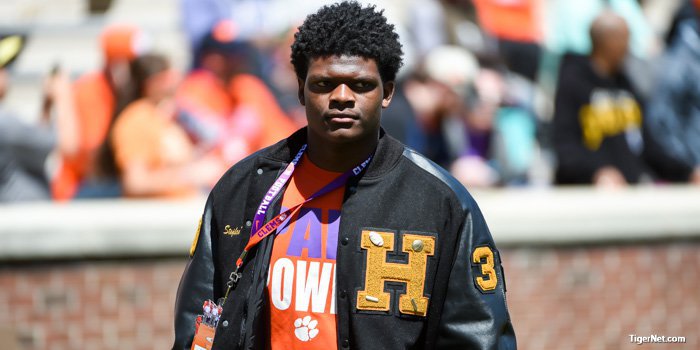 Wynn on the sidelines prior to Saturday's spring game

Stephon Wynn, Jr. has made several trips to Clemson, whether it be for camps, a casual visit or the biggest games, but the talented sophomore left TigerTown amazed after Saturday’s spring game.

The Anderson (SC) TL Hanna 2018 defensive end is the son of Clemson graduates and a former Tiger football player, so there’s not much left for him to learn about the school or the program. However, seeing the passion of the fan base as over 50,000 people showed up for the annual Orange & White game left Wynn impressed.

“I really enjoyed it. I was amazed by how many actually showed up for the spring game,” Wynn told TigerNet Sunday afternoon. “That really caught me by surprise. It was awesome to see 50,000-plus at a spring game. The whole team wasn't even playing. The fans just showed up. That just shows how much they love Clemson.”

Wynn was accompanied by his father, Stephon Wynn, Sr., who played tight end for the Tigers from 1990-1994, and he was able to relive some his glory days with former teammates who had also come back for the weekend's festivities.

“It's cool. He really enjoys it,” Wynn said. “He got to see some of his old friends that he played college ball with. We just had some fun with it and enjoyed the process.”

While on the visit, Wynn was able to spend time with both of Clemson’s defensive line coaches.

“I talked to Coach (Marion) Hobby and Coach (Dan) Brooks,” he said. “I really didn't talk to them very long. Our conversations were really just about how things were going and how they've been tracking me and about my spring practice.”

Wynn currently holds offers from Clemson, Florida, Mississippi St., Michigan St., North Carolina, Penn St., South Carolina, Tennessee, and Vanderbilt. However, he told TigerNet that while he wants to take the process slow, the Tigers are one of the first on his list.

“I really like Clemson, and they're pretty high on my list right now,” he said. “This summer I'm going to try to get around to some schools and tour as many schools as I can that are interested in me, and then I'll evaluate each school.”

In 2015, Wynn registered 65 total tackles, eight tackles for loss and three sacks, but he said he has a lot to work on as the Hanna Yellow Jackets enter spring practice at the end of April.

“Me, as a player, I want to get my hands better off the ball,” he said. “I want to work on my explosion and getting off of blocks faster. I just want to play with a better motor and more tempo.”