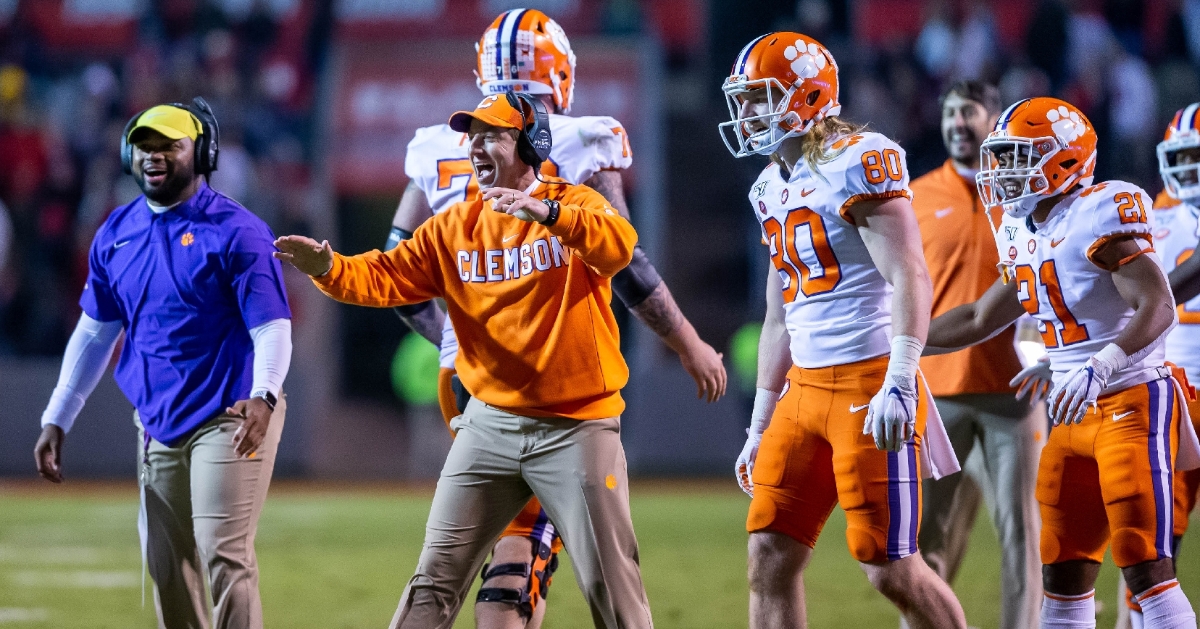 The Tigers left little doubt in Saturday’s victory, jumping out to a 28-0 lead in the first quarter.

“I'm proud of the guys. We just keep harping every week the importance of preparation and getting off to a fast start,” co-offensive coordinator Tony Elliott said. “The guys over the last several weeks have really taken that to heart and have come out firing on all cylinders so it was really good to have those first four possessions where we were able to score touchdowns but still have some opportunities in the second half. We came out and were able to score in the second half with the first group. We didn't quite keep up the pace with the other guys we put in so there still a lot to coach off of but still proud of their effort coming out.”

The Tigers broke out the orange pants – reserved for championship games – once they found out that Wake Forest (next week’s opponent) went down at Virginia Tech earlier Saturday.

“We didn't know. We knew there could be a chance that we could be playing for a division if Wake Forest didn't pull through at Virginia Tech,” Elliott said “Coach (Swinney) made an announcement right there on the field. The guys were fired up. I heard a little bit of talk in the locker room and guys were asking when do they come out. Coach was prepared and he had the foresight and the guys were fired up. They came out and took care of business.”

The Tigers will play in their fifth consecutive ACC Championship Game in Charlotte early next month.

“Really happy for Coach Swinney, our program, our fans, our administration, the athletic department. To be able to have five conference or division titles and a chance to play for a fifth conference championship, I don't think that's been done in college football for any one team to win their conference five years in a row,” Elliott said. “These guys have really embraced the opportunity. Really happy for our seniors. They have a chance to break a record at home next week and then also the state championship and the opportunity to represent our side in the ACC Championship. Still, a lot to play for but proud of the accomplishments so far.”

However, Elliott won’t celebrate the win or think about division and conference championships for too long – there is still work to be done.

“I'm going to get on the play and be thinking about Wake Forest. Wake Forest is a very good football team,” Elliott said. “I really want to see the areas we can improve so I'll probably watch the film on the plane tonight so when I get home I can get some rest because I've got two little boys that they don't care what's going on or what we're playing for, they're going to want to play with their daddy first thing in the morning and then we've got to go right back to work. It think after the season we'll sit down and really reflect and let it sink in but right now I'm just worried about continuing to do my part to make sure I'm giving these players my best effort week in and week out so we can demand their best effort so they can go have a chance to win 11.

“You can't worry about 12, 13 or any of that until you win 11 and we've got a great opportunity to celebrate these seniors at home in Death Valley. They have a chance to accomplish something that hasn't been accomplished in school history so that will be the focus more so than the division championship or the ACC.”