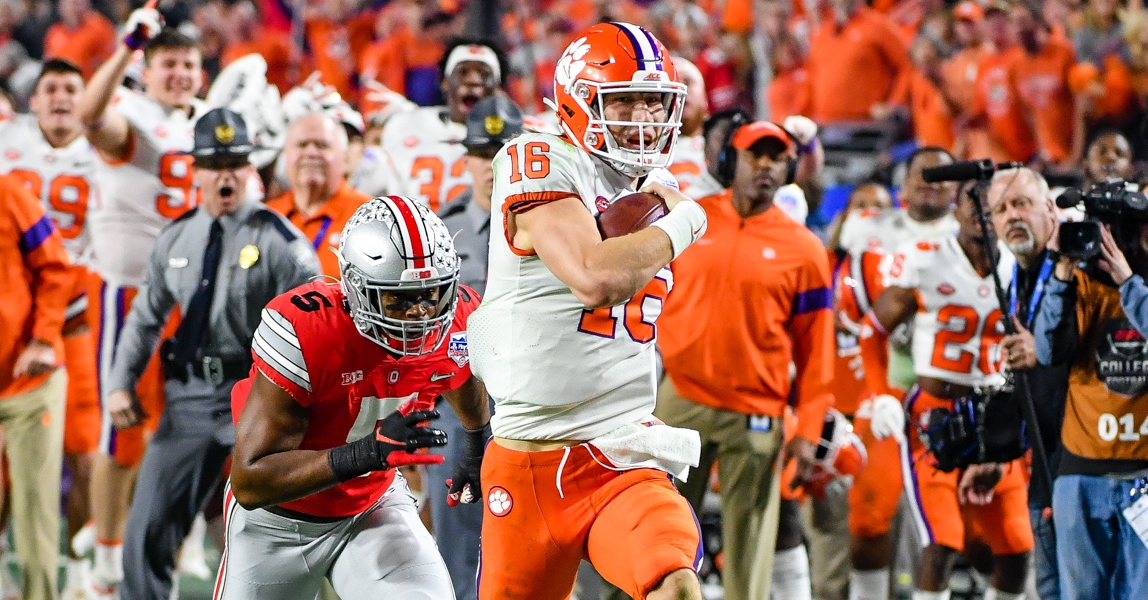 Travis Etienne already set records and will only put them more out of reach as a senior.

Part one of TigerNet's season position reviews and grading focuses on the offense (part two with defense here:

Analysis: Lawrence came into the season with immense expectations as a projected Heisman finalist and All-American QB. His 2019 campaign was instead bookended with some unexpected struggles around as strong a stretch run -- through the Fiesta Bowl -- as any signal-caller in the nation. After eight interceptions in his first 25 quarters (129 pass attempts), the Cartersville, Georgia native ended the season on a school-best 239-straight passes without a pick. Only actually tossing 10 more passes than as a freshman, the biggest addition to Lawrence’s game came on the ground, where he totaled the second-most rushing TDs on the team (9) and 698 yards gained (around 563 yards after sacks). The sophomore also upped his yards per pass attempt (8.3 to 9) to finish ninth nationally, a spot below his national QB rating rank (166.75). Beyond QB1, departing transfer Chase Brice didn’t have a Syracuse pinch-hit moment but did attempt over 30 more passes than his redshirt freshman year, with four touchdowns to one interception -- seeing a sharp drop in his yards per pass attempt, however (8.7 to 6.8). 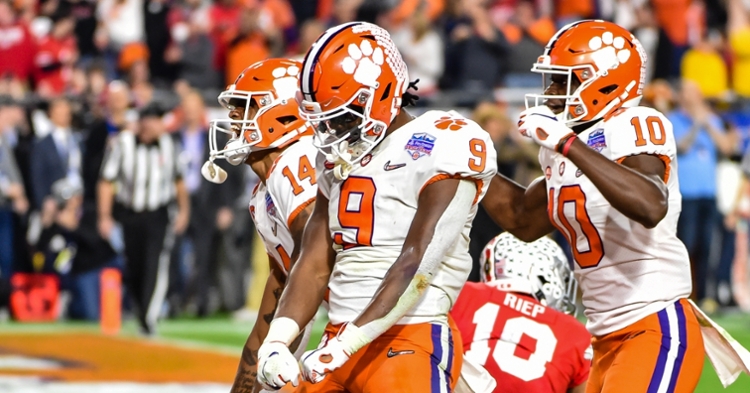 Travis Etienne already set records and will only put them more out of reach as a senior. "

Analysis: Etienne rewrote the Clemson record books in an outstanding junior campaign (which only sets up some crazy record numbers to come after his senior year). The Jennings, Louisiana product took big steps toward being a complete back with his normal explosiveness (No. 2 nationally in yards per carry, 7.8) and improvement as a receiver (career-best 432 yards/4 TDs; had 135 yards and 2 TDs combined as an underclassman). Maybe a bit lost in the shine of Etienne’s great year, the reserve running back group had a quiet season. Lyn-J Dixon was among the national leaders in yards per carry as a freshman but his saw his numbers drop over two yards per as a sophomore (8.8 to 6.1). Chez Mellusi averaged 6.3 yards per carry with three scores over his 44 carries. Former walk-on Darien Rencher got in the mix and scored his first two career touchdowns as a junior, averaging 5.2 yards per carry.

Analysis: There’s a bit of an injury-hampered asterisk on this group, although sometimes the quality depth billed for ‘WRU’ didn’t quite show itself. When healthy, Higgins was dominant, averaging 19.8 yards per catch with 13 receiving touchdowns to tie the career school record (27) before his NFL departure. Justyn Ross had the most issues injury-wise, and like Lawrence, also had some high expectations to match. His 2018 Playoff run featured 12 catches for 301 yards and three TDs, while the 2019 CFP campaign saw one fewer catch (11) for 123 yards and no scores. Hunter Renfrow’s presence on third down was certainly missed -- Amari Rodgers stepping in the slot from game two-on (after ACL injury rehab) to provide a big-play, scoring threat at times (4 TDs; Renfrow had one TD in his senior season). Out of the freshmen, Joseph Ngata had a buzz-filled fall camp and showed some glimpses of that this season out of the fifth-most snaps for the WR corps (17 catches for 240 yards and 3 TDs).

Analysis: This group almost requires an incomplete grade after seeing some positive signs from the two games allowed for Braden Galloway after suspension. He played the most snaps of the tight end group over the last two games and hauled in two catches for 60 yards, matching JC Chalk’s season yardage total over 13 receptions. Luke Price, after converting from the defensive side, stepped in as an impact player in the blocking game and also caught four passes for 41 yards. The tight end role just hasn’t been a factor in the passing game over recent years but Galloway’s title-game performance brings some hope.

Analysis: A veteran group plus new starter Jackson Carman performed well by just about any metric you can measure an offensive line. They ranked fourth nationally in sack rate (2.9) and No. 2 in the percentage of least runs stuffed at or behind the line of scrimmage (11.9). In adjusted line yards, Clemson led the nation (3.22). Up against some tough tests late, they gave Lawrence and company a chance and will be remembered as one of the better O-line groups for Clemson recently.

Analysis: BT Potter had an interesting sophomore season with his fair share of issues on short-to-medium-plus field goal attempts (10-of-18 on kicks of 20-49 yards) and on-the-money on 50-plus-yard attempts (3-for-3), including a BCS/Playoff-record 52-yarder in the national title game. Potter finished the season making five of his last seven attempts. He also didn’t miss PAT attempt (79; one of 47 kickers nationally perfect on PATs, min. 2 per game). On kickoffs, Potter led the nation in average yards (64.6) and ranked fifth in touchback percentage (79).

(Grades and season awards tabulated from votes from TigerNet staff in David and Nikki Hood and Brandon Rink).