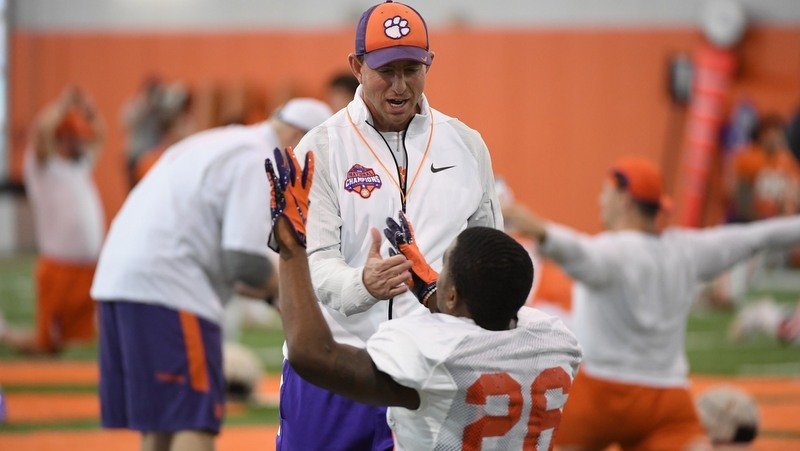 Swinney talks to a player before the start of Monday's practice

CLEMSON - Head coach Dabo Swinney met with the media following Monday's practice, the fourth of the spring, and we have plenty of news and notes to pass along.

Swinney took batting practice with the St. Louis Cardinals Sunday, then spoke to the team. He said he wore his Cardinals hat and jersey to speak to the team today, and said he told them, "It was an emotional decision, but I've decided to stick with football. Like Kyler (Murray)."

He claims he almost "took a guy out" down the left field line during BP.

*Monday was the first day of live work. Swinney said he wants to see where the young guys are and how they respond. Says he loves the effort and willingness not to be afraid to fail. He says the team is coming together and there is an eagerness to pull it all together.

*Kyler McMichael pulled a hamstring a few days ago and has been limited. Swinney said Mario Goodrich has been working at the boundary corner. He then mentioned that LeAnthony Williams has made a lot of improvement. He says Williams is more serious about becoming a better football player and he is encouraged with the work he's put in.

On Sheridan Jones: "He will bite ya. He's still a little light in the pants right now, but football-wise and with his instincts and awareness he's a smooth dude. We hit on him. He reminds me of Crezdon Butler."

*Swinney said that defensive tackle Darnell Jefferies caught his eye today. Said he was disappointed with Jefferies at the start of camp – he was lighter than he needed to be – but has picked it back up the last few days. Says it looks like he’s serious about being a great player.

*Swinney said that the injuries to Nyles Pinckney and Jordan Williams might be a blessing in disguise. Said that it has forced them to be leaders and they have done a nice job of leading and coaching. He said the absence of those two has forced other players to step up, and he’s been pleased with Xavier Kelly.

Price has moved from linebacker to tight end, and Swinney says, “That guy will bite ya. We’ve got him in the right spot. He’s just raw.”

*Former Akron coach Terry Bowden will be in town for a few days to watch practice. Swinney said Bowden wants to get back into coaching on the offensive side of things.

*Dabo laughed and said if quarterback Trevor Lawrence would “shave his head he might blend in a little bit more.”

*Frank Ladson and Joseph Ngata are working at the outside receiver positions.

*Offensive lineman Noah DeHond missed Monday’s practice (offseason nerve surgery) and Swinney said it might be August before they decide on whether he’ll be able to play. Right now DeHond is going through the process and is way ahead of where they thought he would be, but isn’t ready for contact.